Special Report: Winners and Losers in Horn of Africa 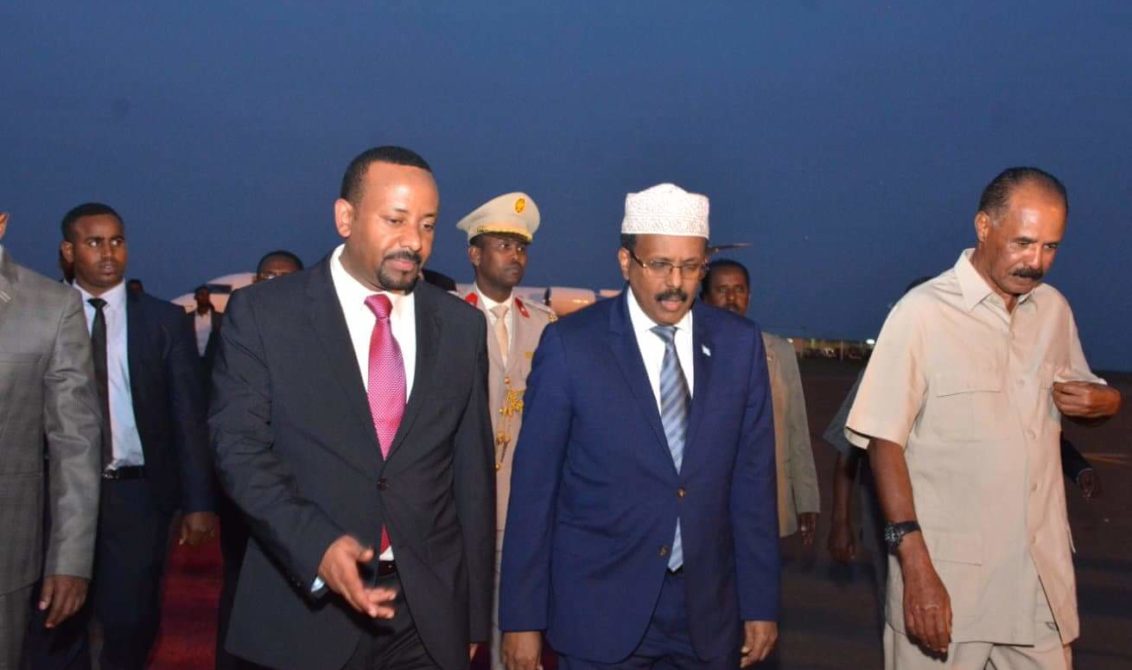 Though the initiative isn’t a surprise given the sweeping reforms by the new Ethiopian prime minister Abiy Ahmed, the announcement is groundbreaking and has the potential to change the region’s overall political and economical interplay.

NAIROBI – The countdown to a new regional economic integration initiative for Somalia, Ethiopia and Eritrea has begun, with a commitment from leaders of the three countries to cement regional ties, following a second tripartite meeting, held in the Ethiopian city of Bahir Dar this week.

The agreement — signed by President Mohamed Abdullahi Mohamed of Somalia, president Isaias Afwerki of Eritrea and Prime Minister Abiy Ahmed of Ethiopia highlighted the importance of “cementing the outcome of the Horn of Africa economic integration agreement,”, a concrete way of looking at how this massive decision changes the region’s old political dynamics, for the better for some and for the worse for others.

Though the initiative isn’t a surprise given the sweeping regional reforms being pushed by the new Ethiopian prime minister Abiy Ahmed, the announcement is groundbreaking and has the potential to change the region’s overall political and economical interplay.

It will also benefit some while hurting others — and the winners and losers aren’t the ones you’d expect.

Somaliland: The breakaway northern Somalia territory has long maintained warm relations including an informal diplomatic link with Ethiopia’s former regime, something that Somali leaders have long complained were threatening to perk up the diplomatic limbo-status quo of the enclave which is still struggling to get an international recognition.

With the former regime long gone, noose tightens on Somaliland for the time, with the three horn of African leaders agreed to respect the ‘sovereignty, territorial integrity and political independence’ of Somalia which had long sought to block decades-old bid for independence by the northern territory, a development which will likely deny Somaliland of anymore political maneuvers across the region.

Eritrea and Ethiopia leaders have also vowed that they’d standby Somalia’s central government, an apparent check for Somaliland’s ambitions for building relations with the two countries, amid likelihood of more measures by Addis Ababa to restrict its unsanctioned relations with Somaliland would follow, in an apparent reversion of the former Ethiopian regime’s political stand towards Somaliland, by Ahmed’s administration.

The former TPLF regime on the other hand, has also fallen foul of Somalia’s government, most recently, when it signed a port management agreement with the semi-autonomous region of Somaliland – but the new 42-years-old prime minister’s shift in Ethiopia’s old political approach towards the region now appears to be turning tables against Somaliland.

“In this context, Ethiopia will likely push even harder against Somaliland, and that could well raise stakes to higher levels –That’d firmly put Somalia’s overall authority into the hands of the central government.” said Jacob Moses, a Nairobi-based political analyst.

In addition, pressure is already mounting on Somaliland which also saw its relations with the neighboring Djibouti crumbled in recent years due to of its port deal with the United Arab Emirates’ global ports operator, DP World which will challenge Djibouti’s virtual monopoly over maritime trade, further isolating the enclave which has long enjoyed cordial relations with neighboring countries, apart from Somalia which it had long considered to be a threat to its struggle for sovereignty.

“While we are busy challenging each others, Farmajo was diligently working behind scenes to turn Ethiopia away from us – this a very serious matter, you have to know.” He told reporters on Monday referring to the Somali leader.

Earlier this year, Djibouti has ordered the nationalisation of the Dolareh Container Terminal, a vital port facility, after a long spat with DP World which has since turned its attention to Somaliland as an alternative investment hub.

“At this point, Somalia is in no rush for negotiations as its current position is growing stronger and can capitalize on Somaliland’s dwindling status for its own advantage.”

For decades, the international community had avoided making any political promises to Somaliland which has declared a unilateral independence from the rest of Somalia in 1991 and opposed the region’s ambitions for an international recognition.

“Somaliland had already conceded significant defeats including the loss of the airspace authority to Somalia which furthered the significant pressure it faces by blocking it from even establishing unofficial diplomatic presence in several countries,” argued Ahmed Mohamed, a university professor in Hargeisa, Somaliland’s capital by email.

“Literally, it was a gradual degradation that had been in the making for years that Somaliland had to watch from stands helplessly.”

Somali government has retaken control of the country’s air space after more than two decades last year. Air traffic over the Horn of Africa nation had been controlled by the United Nations from neighboring Kenya since 1992, a year after the Somali civil war broke out. Despite initial complaints by Somaliland over Somalia’s control of the airspace, its protest faded months later.

TPLF, the tiny minority ruling party which for decades ruled behind the fig of a larger ruling coalition had wielded maximum power in Ethiopia and had exercised a superfluous influence across the volatile region and as some observers noted used its unlimited power to destabilize some countries including Somalia with which Ethiopia had maintained a relationship characterized by mistrust and aggressive political manipulations by exploiting Somalia’s fragile situation following decades of civil unrest.

Despite subsequent complaints by Somalia against Ethiopia’s decades-old interference in the country’s internal affairs including support for warlords and regional states, TPLF’s dubious policies towards Somalia continued unabated until recently before the country elected the new reformist prime minister Abiy Ahmed, who is from the long-oppressed Oromo, Ethiopia’s largest ethnic community.

“Ethiopia’s interference in our country’s internal affairs was a very challenging matter, and I have raised this with prime minister Abiy, and things are now changing for the better.” said Somali president Mohamed Abdullahi at a press conference in the Somali capital on Wednesday.

But in the end, the TPLF’s stranglehold on power had brought Ethiopia to the verge of collapse, leading to massive protests that led to the resignation of the former Prime Minister Hailemariam Desalegn. The ruling coalition’s government was forced to oust its prime minister, release thousands of political prisoners, and consent to the appointment of Abiy, an Oromo leader, as the new head of state.

Starting his new job, Abiy has proved more of a firebrand than expected and has been moving quickly to generate a political following and dismantle the TPLF’s grip on power. He has also signed a peace deal with the neighboring Eritrea, a long time archrival.

His reforms had already won him the hearts and mind of the people in the region and around the world, and brought Ethiopia closer to its neighboring countries, a scenario which experts believe eroded TPLF’s long-held dream of ever returning to power.

In the meantime, the new regional economic integration deal which paves way for free inter-regional trade movements also seeks to walk back decades of secret support by TPLF to opposition and anti governments’ groups in the region, especially in Somalia which is recovering from decades of civil unrest.

For years, regional states in Somalia have challenged each move by the central government, a political strategy they have long used to capitalize on for their own advantages at the expense of the government which has maintained its assertion that the questionable challenges by the country’s regional leaders owed to a political, financial support and meddling by Ethiopia’s former regime – but with Abiy Ahmed in power, Ethiopia now embraces a new era of reforms by the new firebrand prime minister.

Since he came to power, Mr. Abiy has announced a flurry of reforms in a bid to reverse decades-old policies implemented by TPLF to reshape the nation in an attempt to improve relations with neighboring countries.

His moves analysts say represent dramatic shifts in the power balance within Africa’s second-most populous country also saw him forged a closer relationship with Somalia, a country which Ethiopia had rarely considered as an important partner.

Somalia has became one of the first countries that Mr. Abiy has paid an official visit in his first two months into office, and pledged a closer cooperation with the long-chaotic horn of Africa nation by closely working with the central government.

Among his sweeping reforms is that his government has dropped relations that his predecessor’s government had maintained with Somali regional leaders who have regularly travelled to Ethiopia, which is called by many as the Mecca of Somali leaders for consultations with Ethiopian officials.

Mr. Abiy has instead chosen to concentrate his government’s cooperation with Somalia’s central government alone, and in turn shut out regional administrations, a move which experts predict could end the entrenched tradition of endless political challenges posed by federal state leaders against the government that had long frustrated the country’s leaders. 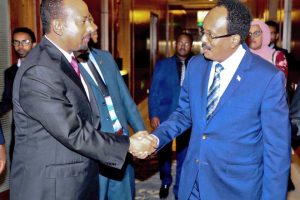 President Mohamed has made a new friend – Abiy Ahmed, the new reformist Ethiopian prime minister. The alliance, say analysts, is good for both Somalia and Ethiopia.

Their friendship came about in a surprising way.

“Building such a relationship between Ethiopian and Somali leaders appeared implausible a short time ago, but this will increase the trust that’s required for intelligence sharing and other delicate matters,” said Aaron Abel, a former Ethiopian diplomat in Addis Ababa by email.

When they met in Addis Ababa last week, Abiy gave Mohamed a manly hand shake, showing he was a force to be reckoned with. Mohamed’s smiley gesture implied a response of a deep appreciation.