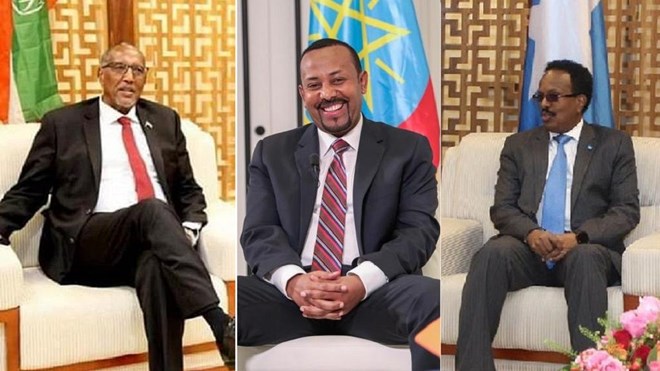 A high-ranking official in Somaliland had confirmed a proposed visit to Hargeisa by Abiy and Farmaajo on the initiative of the PM. Hargeisa is capital of Somaliland, an autonomous region of Somalia.

Voice of America journalist and author of “Inside AlShabab,” Harun Maruf posted a tweet that said Somaliland’s chairman of House of Elders Suleiman Mohamoud Aden as saying PM Abiy Ahmed was “pushing for a joint visit to Hargeisa by him and Somalia President Mohamed Abdullahi Farmajo.”


It is the first concrete report of an information that started making the rounds on Twitter on Saturday evening when a post to that effect was made by one Khaalid Foodhaadhi.

A meeting between leaders of Somalia and Somaliland in Addis Ababa was brokered by Abiy last week after the 33rd African Union summit.

The Somali presidential spokesman confirmed that the “ice-breaking” meeting had indeed taken place between Farmaajo and Somaliland’s Muse Bihi.

Days later, Farmaajo made a public admission over excesses by the Siad Barre regime in the late eighties against Somaliland. An admission that received largely good comments on social media.

The planned joint visit to Hargeisa has also received positive traction as many people on social media see it as a positive first step towards finding an amicable solution to the longstanding rift between Somalia and Somaliland.

LOL, but, I think politically the Ethiopian and Somaliland relationship has chipped a bit due to the latest political storm that rocks the somali media for the last day or so. Personally, i'm quite disappointed that a SL ally would bring Madaxweyneka aminson xaarmaajo with him .

This title is inappropriate and needs to be changed, not worthy of the political section @admin

VIP
I totally agree with my adeero muse shaani on this one.

WIN WIN for farmaajo now he will go back to the international community and say somaliland is blocking the talks while he focuses on the south.

nomand said:
WIN WIN for farmaajo now he will go back to the international community and say somaliland is blocking the talks while he focuses on the south.
Click to expand...

Why must abby come with him and not him alone.

nomand said:
WIN WIN for farmaajo now he will go back to the international community and say somaliland is blocking the talks while he focuses on the south.
Click to expand...

What win lol? It just further shows that even with the help of the Ethiopian PM, Farmajo wasn't able to step one foot into Hargeisa.

Also the IC is very much aware that previously it was in fact Somalia who went against what was agreed during the Turkey mediation..

Win win kulaaha, it's more of a loss for Somalia who tries to tell the IC that SL is part of Somalia yet they are in the eyes of the world incompetent when it comes to this. The president can't set foot in a city he claims lool...

VIP
Are u gay @Lordilord

Dem landerz might be weird and all that, but at least they didn't compromise their beliefs like mr cheese did

Papa abiy must hold farmajos hand because farmajo is too scared on his first day of school.

Daacad90 said:
Papa abiy must hold farmajos hand because farmajo is too scared on his first day of school.

I hope you not taller than me

Guled111 said:
I hope you not taller than me
Click to expand...