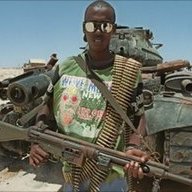 'I joined a ship, which went to Liverpool, then to Lisbon. I was the only Somali on board; the rest of the crew consisted of a West Indian called Moses, a German, a Pole, and two jolly Irishmen. The German and I became great friends.

Moses and I were put on the same watch: Moses worked the port boiler, and I the starboard boiler. The shovel belonging to my boiler was a new one but the other one was old and had an impaired edge, which made it more difficult to work; invariably Moses would grab the new shovel that had been left on my side, and I had to use the bad one.

After a good many days I told him: "It is not fair that you should use the good shovel all of the time". He gave no answer. At our next watch I made sure to grab hold of it before him. He tried to snatch it from me, but I refused to let go. Then he poured upon me a torrent of insults which meant very little to me as I could hardly understand them. After we had cleaned our fires, Moses took his slice and sliced his three fires, I did the same – for by working in unison it is possible to get up steam much quicker. Having finished, I put my slice on my ash-pit damper, and leaned on my shovel while Moses was finishing his last fire, the nearest to me. When he finally pulled out the red-hot slice from the furnace, he hurled it at me with both hands saying "Take it you Arab bastard". I pulled myself up and just escaped the tool, which did no more than graze my thighs.

For the moment I remained dumbfounded. Then I thought to myself; Moses has tried to kill you, and has missed; now your turn, and don't miss him! I did not utter a sound. The Pole and the German who had kept the previous watch were still waiting for us to pass the ashes on to them. One shouted "hurry up, we want to go to bed". I said to Moses with composure: "Let us give them the ashes". "All right" he answered. I took the shovel while he was holding the sack open. I put in a few shovelfuls and then I took up the hammer which I had placed handle upwards by my side and I aimed at his skull. Fortunately for him – and still more fortunately for me – he raised his head at that very moment and the hammer missed him! It was his turn to be paralysed with stupor. Then we rushed at each other and fought like two wild animals until we were exhausted.

Then Moses tried to argue he had no intention to kill me, but he failed to convince me. I urged him to try recognise the truth: we have both tried to murder one another, but we have shown ourselves very bad marksmen. At the same time we realised what fools we had been. If one of us had killed the other he would have been hanged and nobody would have cared about either of us. And after that we became good friends.'


'In January 1924, I went on a voyage to South America. In the spring, however, I returned to Whiteway. My friend told me of a place called Wembley where things from many parts of the world were to seen, and we went there together. Here we saw big machines moving by themselves and all sorts of other strange and wonderful things. I felt overwhelmed by it all. It appeared to me as if the world had been made for Europeans, who had only to stretch out their hands to bring before them, as by magic, all the products of the Universe.

After the first afternoon at Wembley, we went to Bloomsbury to get a lodging as we had decided to stay a week. Most lodging places were full, but, to my friend’s amazement, even those house-keepers who had a spare room would not take me in. Tired and disheartened, we thought we would try Rowton House, where we thought anybody would be given a night’s lodging; but here also we were politely told: “The establishment does not accept coloured gentlemen”. We dragged ourselves on, until, at last, we were given hospitality by an old Russian Jew who had tramped through Siberia to China.

On the day we were to return, I arranged to meet Gassy [Gaspard] at the British Museum, but I lost my way in the tubes as I could not read the names of the stations quickly enough. Having missed the train at Paddington I did not arrive at Stroud until late at night. I searched all over the town but could not find anyone who would let me a room for the night. At last I found a policeman in plain clothes who did his best to help me to find a lodging. He tried many places and presented me as a British subject who had served in the navy during the war; at last, as he himself was giving up hope, we found a kind old lady who agreed to put me up. The next morning I walked back to Whiteway.'