The father of Osama, Mohammed Awad bin Laden lived in Mogadishu as a child where he got injured

Omar bin Laden on his father

A son of Osama bin Laden paints an intimate portrait of the man who would become the world’s most infamous terrorist. 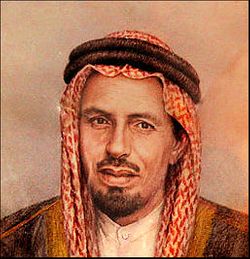 Since Yemen offered few possibilities in those days, my grandfather bravely turned his back on the only land and the only people he had ever known, taking his younger brother, Abdullah, with him to join one of the many camel caravans trekking through the area.

After traveling through the dusty villages and towns of Yemen, they arrived at the port of Aden. From there they sailed a short distance across the Gulf of Aden to Somalia. In Somalia, the two bin Laden boys were employed by a cruel taskmaster, known for his furious outbursts. One day he became so annoyed at my grandfather that he hit him on the head with a heavy stick.

The injury resulted in the loss of sight in one eye. My grandfather and uncle were forced to return to their village until his recovery. The following year they set out once again, this time traveling in the opposite direction, north to Saudi Arabia. I’m sure they were eager to stop at many outposts, but nothing seemed to have the magic they were seeking. The two boys, young and unlettered, lingered only long enough to earn sufficient money to stave off hunger and to continue what must have seemed an endless journey. Something about Jeddah, Saudi Arabia, appealed to my grandfather, because that walled city on the Red Sea marked the end of their arduous voyage.
Click to expand...

Narrated by Omar bin Laden, son of Osama. He's the one with dreadlocks.

Osama's father lost an eye due to his boss beating him up, he had to go back to Yemen. Imagine if he stayed in Somalia instead had that boss not been so cruel to the boy.
Last edited: Jun 1, 2020
D

VIP
I wonder if the boss was HG

Dawo said:
I wonder if the boss was HG

Most likely another arab/benadiri. They were the majority at that time, especially in trade/port.

VIP
Too bad the boss didn't hit him hard enough.

hannah54321 said:
Nah we can’t associate the bin ladens with Somalia we have enough problems
Click to expand...

Somalia is indirectly responsible for everything