Saahid Qamaan said:
The difference of Puntland and Somaliland whose regions covers these projects is that in Somaliland people know about the projects whereas in Puntland this progresses are falsely attributed to failed leaders. Shows that Somaliland is ahead in governance and accountability.

EU funded projects that started 5 years ago are blindly attributed because a failed leader is doing the job of the local mayor for a photo-op.

However everything is documented and those who lie about this long term projects will be eventually found out and tutored.
Click to expand...

Boqorka what I added is the groundwork, grant application and dates to refute the claims of some people about this project.

Saahid Qamaan said:
Boqorka what I added is the groundwork, grant application and dates to refute the claims of some people about this project.
Click to expand...

You seem super bitter. Nobody claimed that it was initiated under Gaas' presidency nor that the Puntland government fully sponsored it ( for crying outloud it's a public private partnership, the word says it all). However, it was finished under his presidency. Don't take that away from him. I remember you shitting on the thread about the thread on bosaso port and brought the airport to the discussion. We know the sponsoring was done under Faroole (though the first steps were taken by Cadde admin), but giving the contract to CCECC, the start of the entire contruction and finalising the airport was done under the watch of his Excellency Prof. Dr. Xaaji Gaas.

I remember you criticising him for not carrying a bag during Hajj. Your cricism lacks perspective.

Abdalla it is funny that in your long post you said actually nothing.

What I wrote and posted is substantinated, I know everyone reading it will acknowledge the truth of this projects.

As I outlined Abdiwali Gaas is doing the job of local Mayors. I remember the road that leads to the airport in Bosaso he once flew in from Dubai to cut the ribbon. It was funded by Italy through the UN.

Like wise as proofed the project in this thread was funded by UNICEF and the EU. I provided the documentation and evidence.

I also posted news of Wajaale in Somaliland from the same source about this project on the UNICEF website where the same project was concluded a month ago.

Furthermore I highlighted the difference between Somaliland and Puntland which shows that the people of Somaliland are ahead in governance and transparency, their top leaders do not go out of their way like Abdiwali Gaas to cut a ribbon of a UNICEF project funded by the EU years before he came to office while taking the job of the local mayor and gullible supporters insinuate that he did all by himself from his own pocket.
Last edited: Sep 20, 2017

Bringing discussions of other threads only highlights the desperation in you.

I brought evidence of the purposefully omitted fact about the other project such as Garowe Airport and Bosaso Airport. Even your friend Cotton was confused and wrongly attributed Bosaso Airport funding to Kuwait fund which was in the case of Garowe Airport and provided evidence pictures and written statement from their website. I also informed him that Bosaso Airport (Bandarqaasim Int. Airport) was funded by Italy through UNOPS and asked why the Italian delegation where visiting a former state President in his hotel room.

The topic about the hajj was to show that the fanfare and circus about him flying there to finalize deals for 'mega' port was inaccurate. This was to make a mockery out of those who spew lies about that trip. We all know that Karim Benzema of France (football player) had more of a entourage than Abdiwali could wish for who travelled lonely amongst the ordinary crowd.
Last edited: Sep 20, 2017

I will continue to highlight the facts and truth of donar funded projects and the descrepancies in reporting and wrong attribution of gullible cheerleaders.

The topic about the hajj was to show that the fanfare and circus about him flying there to finalize deals for 'mega' port was inaccurate. This was to make a mockery out of those who spew lies about that trip. We all know that Karim Benzema of France (football player) had more of a entourage than Abdiwali could wish for who travelled lonely amongst the ordinary crowd.

Mariam is among some 40,000 people in Wajaale who will benefit from the “Improved Urban Water Service Delivery” project being delivered through a Public Private Partnership funded by the European Union and UNICEF. Wajaale was selected as one of four towns in Somaliland for the project in 2012. 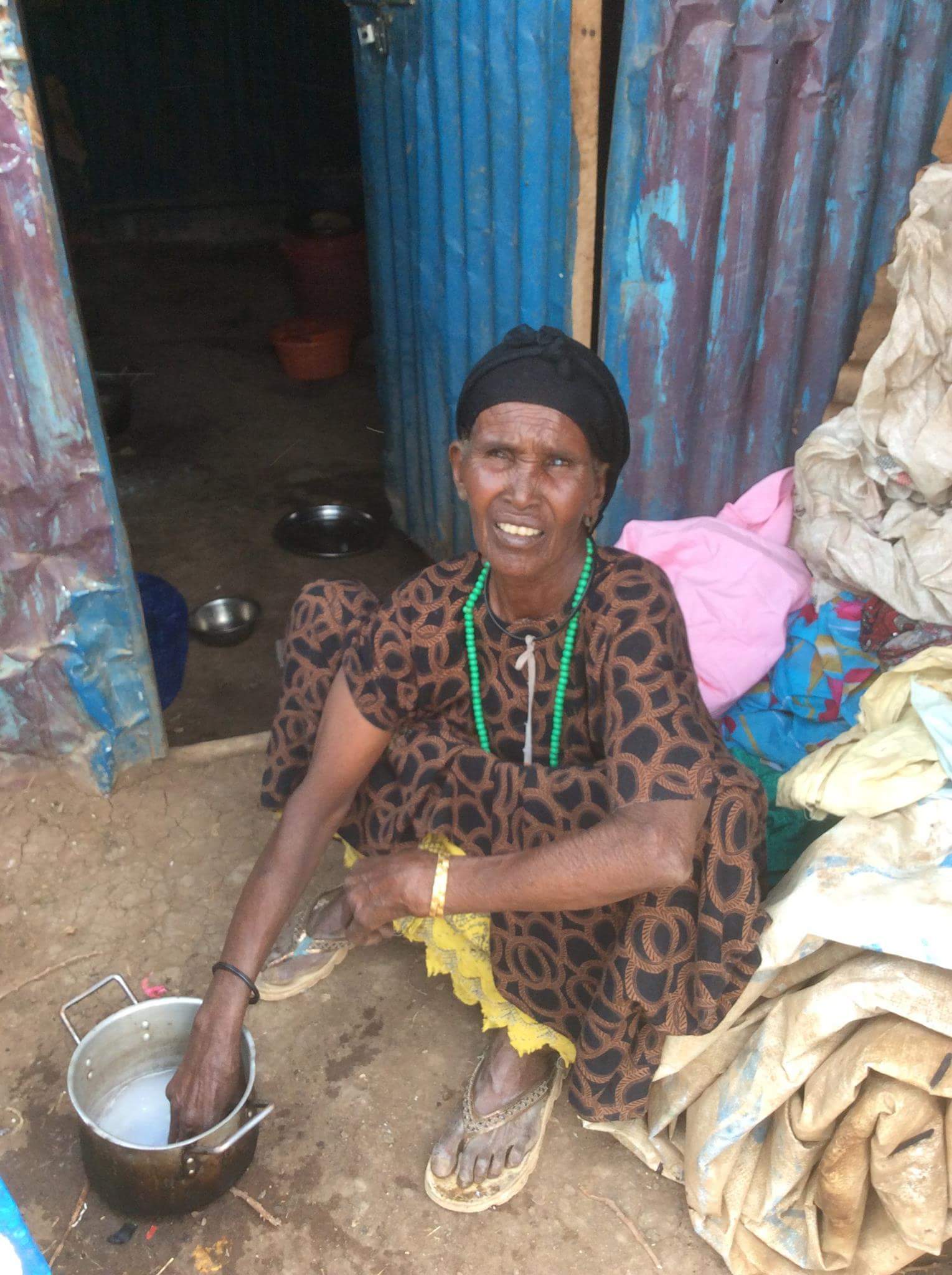 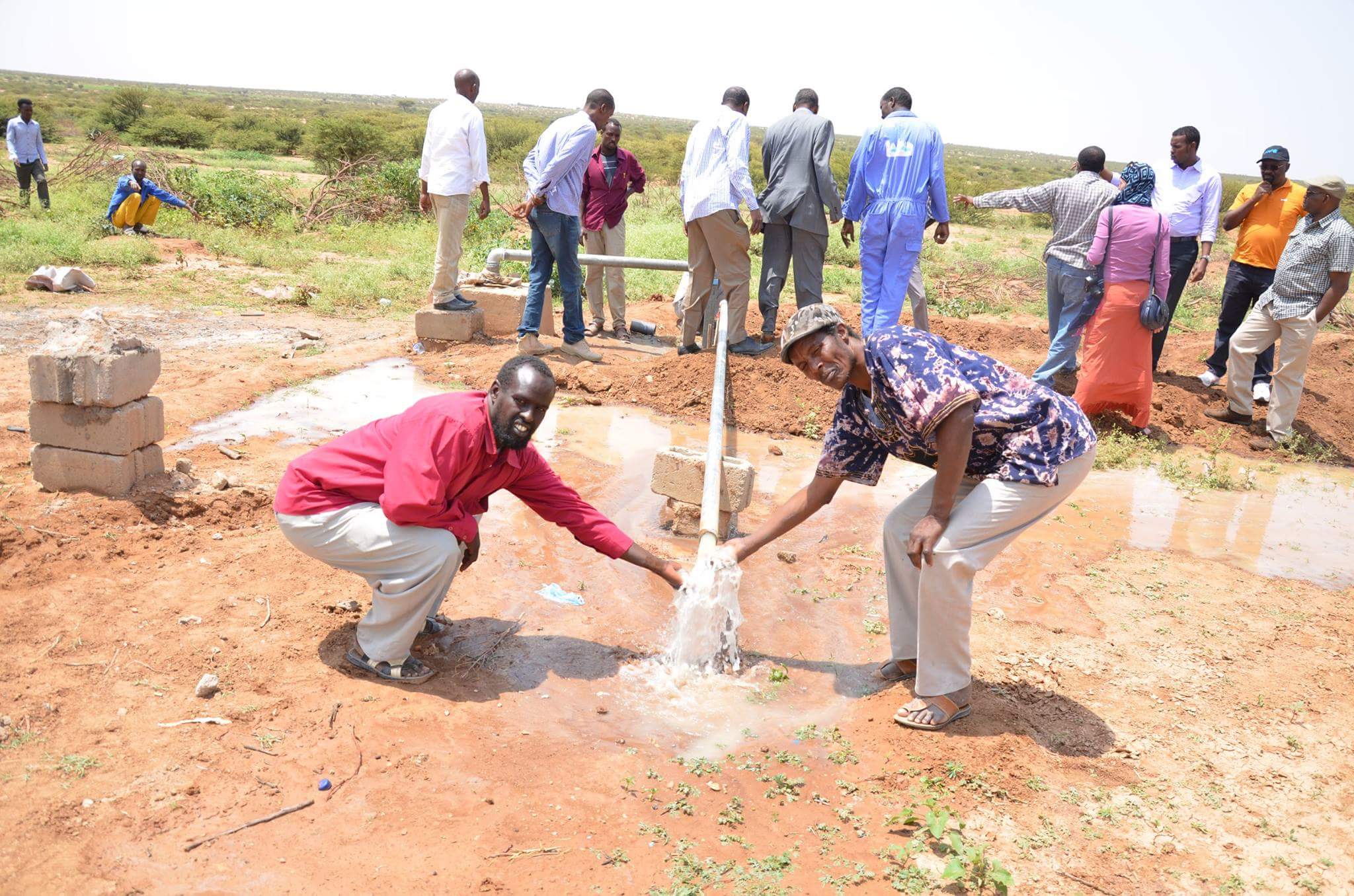 This is a company which helped in some aspects of the project and got part of the money from EU/Unicef to come up with PPP for the four cities in Somaliland. Somaliland received 7.5 million overall for four cities for the urban water project. Borama, Burco, Wajaale and Erigavo. Hargeisa received 16.5 million for its water supply project.

Helping with some aspects in Puntland

Seems like Puntland is doing more for Somalis than the federal government, Hopefully soon the FSG will get better and assist Puntland with its development targets but for now good job to Gaas

GUMCO is the PPP set up for Bosaso. Project started several years ago in Somaliland and Puntland cities. It was funded by Unicef and the EU with PPP involvement. 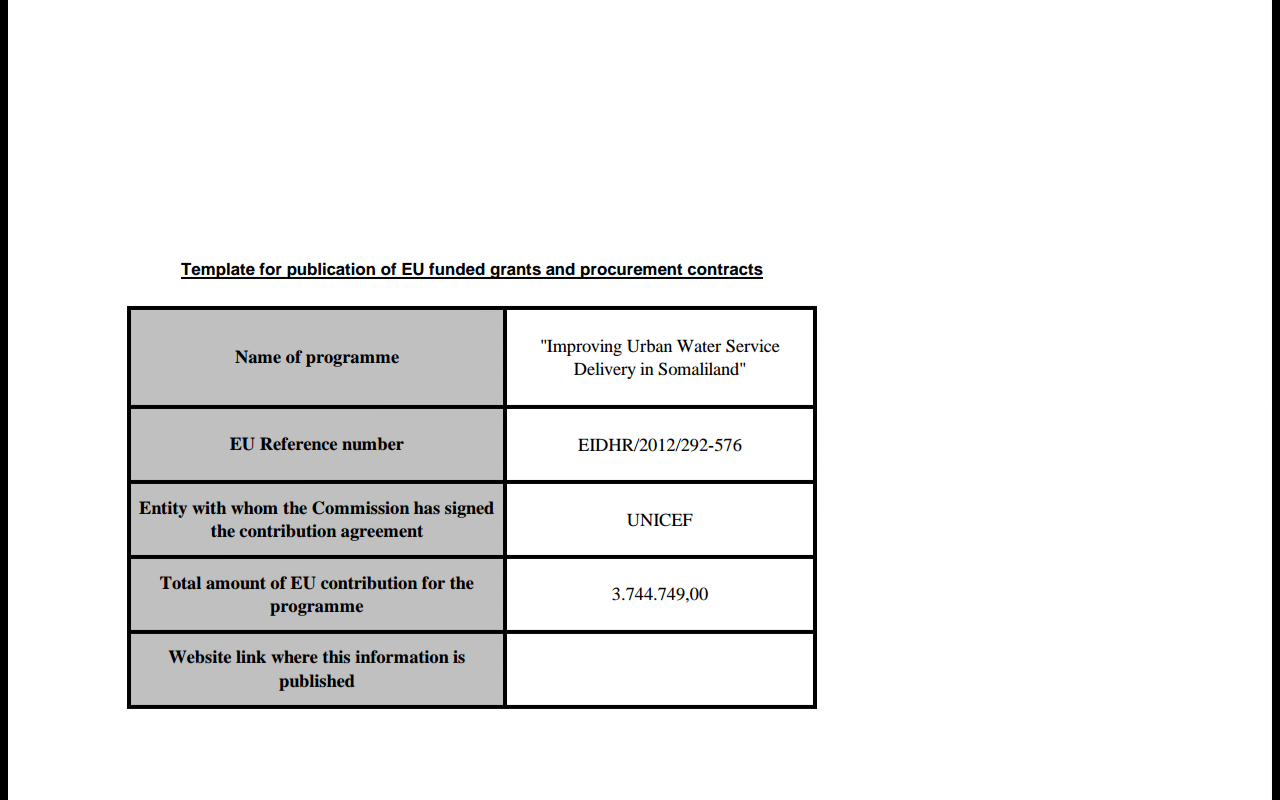 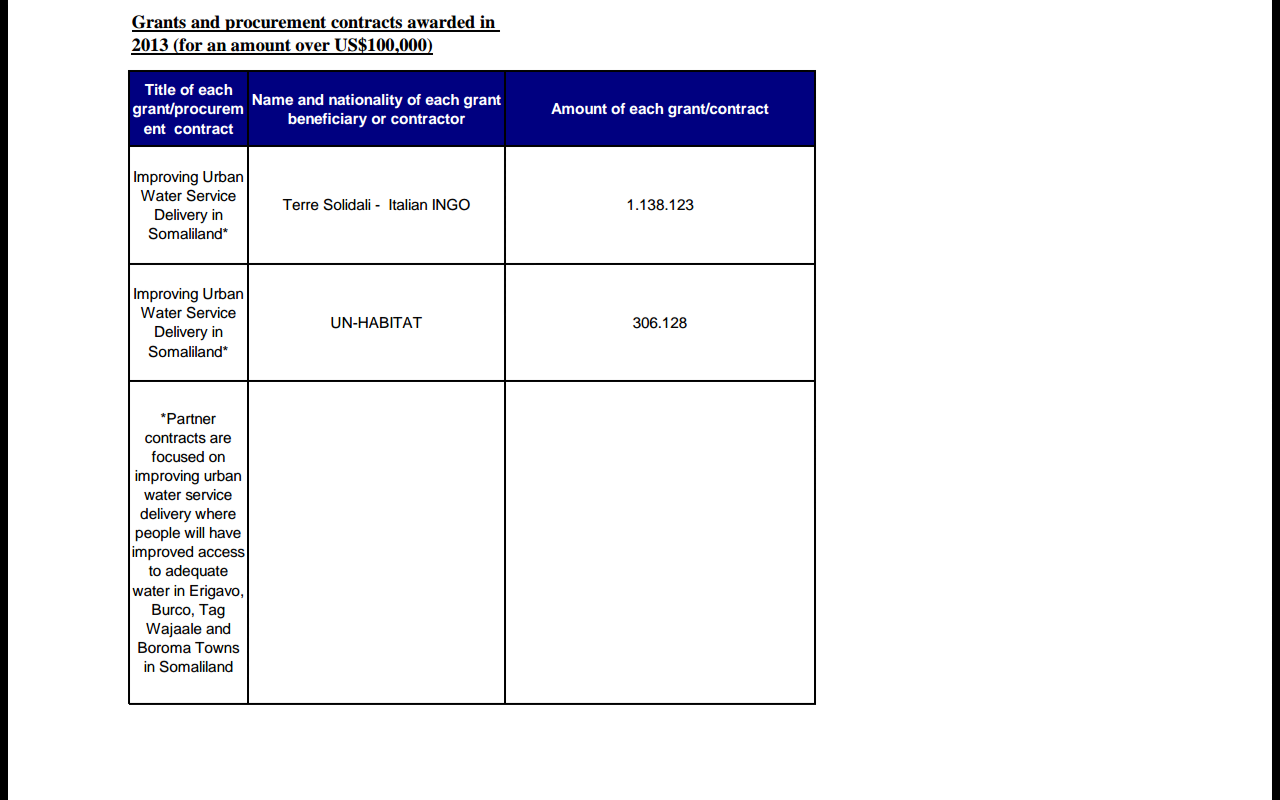 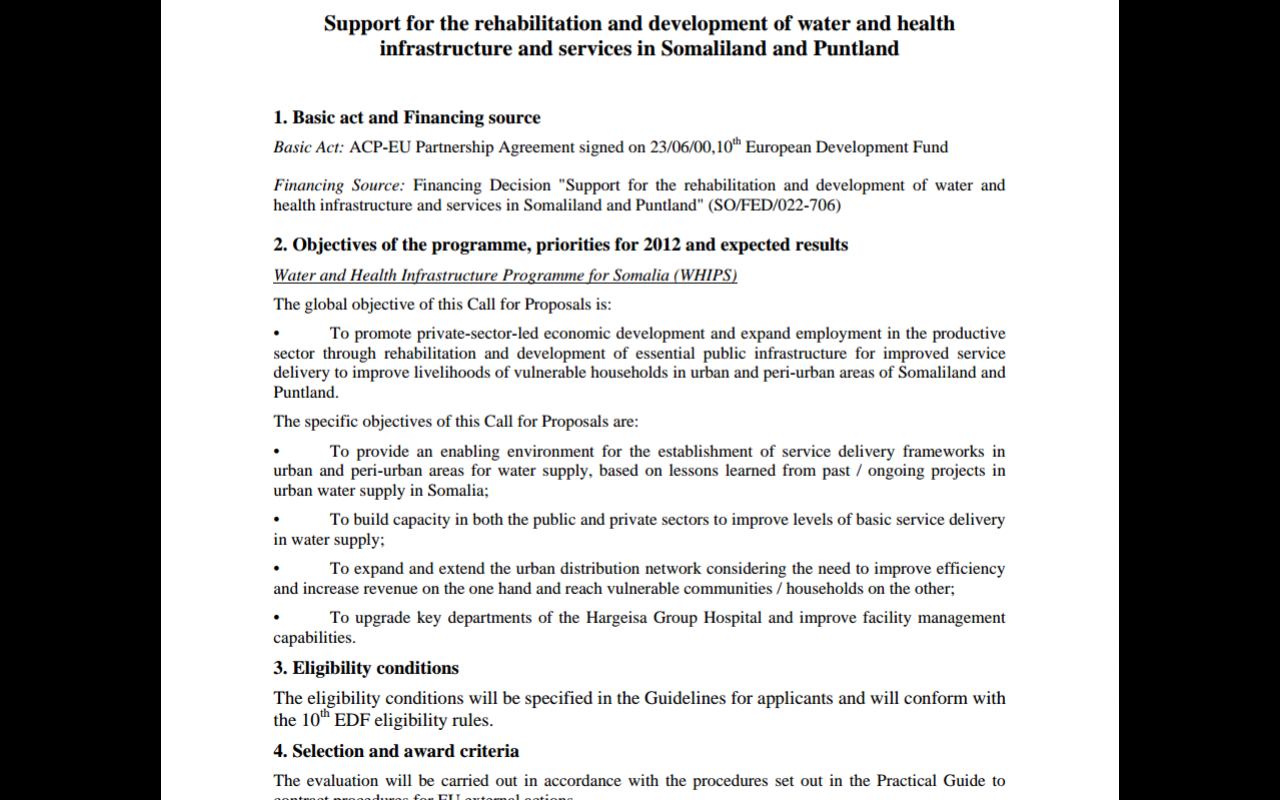 It is comical how delusional folks here talk about the humanitarian intervention of UNICEF and EU in health, water and education and credit it to a corrupt failed leader eventhough these projects have been in the pipeline since 2012!