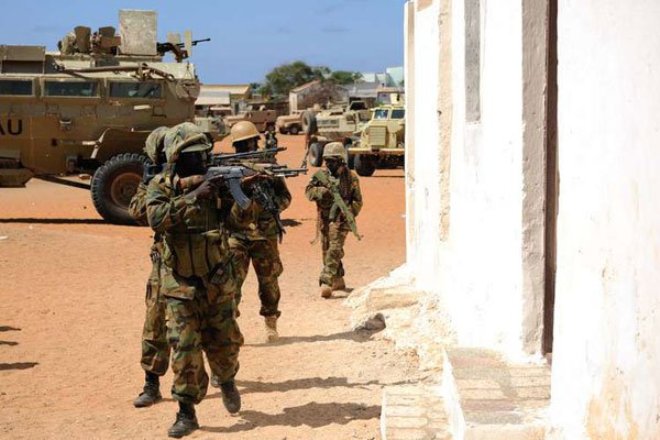 "It is assessed that at least 50 Amison troops died," said a briefing note sent to diplomats by Western military officials and seen by AFP.

It said that in total around 100 soldiers were "unaccounted for" after the attack.

Somalia's Al-Qaeda affiliate said the attack in Janale District, 80 kilometres southwest of Mogadishu in the Lower Shabelle region, was revenge for the killing of seven civilians by Ugandan troops at a wedding in the town of Merka in July.

Amisom has said the camp was manned by soldiers from Uganda.

The number feared dead matches that claimed by an Al-Shabaab spokesman.
Amisom has not yet counted the dead.

"Given the complex nature of the attack, Amisom is currently verifying the number of casualties and extent of the damage," said a statement issued late Tuesday, more than 12 hours after the assault.
Western military sources said the attack began with the destruction of two bridges, cutting the camp off.

A suicide car bomber rammed the base followed by an estimated 200 Al-Shabaab fighters who overran the camp.

Amisom said its troops "undertook a tactical withdrawal" as the attack began.

The group has previously gathered the bodies of dead soldiers for use in propaganda videos of its attacks.

The militants are fighting to overthrow the internationally-backed government in Mogadishu, which is protected by 22,000 Amisom troops from Burundi, Djibouti, Ethiopia, Kenya and Uganda.

Tuesday's attack on the camp in Janale is one of the deadliest yet against Amisom troops.

A similar attack on a military outpost in Lego in June killed dozens.

But they never bothered going after Ethiopia which is a bigger enemy. This is clear Al-Shabaab is an Ethiopian proxy.

Ethiopians are battle hardened warriors. They have their defensive posts secured tightly. These Ugandan and Burundi bases have proven to being lightly secured and vulnerable.

Also I don't think AS is proxy of Ethiopia nor the West.

This is very good news