A series of Somali success stories in the diaspora.

Somalis from the diaspora begin to return to the north-eastern Somali region of Puntland to help rebuild their country.

Children at a camp for internally displaced people in Galkayo. Somalis are returning home to work in non-governmental organizations in Galkayo, including those helping the displaced.

GALKAYO, Somalia, February 8 (UNHCR) - When Hibo travelled for the first time to Somalia, the country her parents left decades ago, she spent her nights gazing at the stars. “I saw quite a number of shooting stars. I found it so amazing that I told the guard at the gate how beautiful Somali nights were with all the stars. He laughed and told me these were bullets being shot by militiamen,” she recalled here recently.

This gun culture came as a rude awakening for the young woman raised in the United Arab Emirates, but it has not put her off her determination to help rebuild her homeland. Hibo, who came to Galkayo last year after graduating from university, is one of an increasing number of skilled people from the Somali diaspora who are returning to this town in the relatively stable region of Puntland.

There are no official figures for the number coming back, but aid workers say many people are returning to work in local and international non-governmental organizations [NGO] or set up their own agencies. “The professionalism they bring to local NGOs is striking,” said one aid worker in Galkayo, which is home to some 50,000 people displaced by fighting in Somalia.

The aid workers say a lot of older people have come back to settle, while educated young people such as Hibo tend to return on a temporary basis, hoping to discover the country their parents talked about and to offer their help.

Hibo is spending a few months working for a local women’s non-governmental organization whose activities are supported by the UN refugee agency. The city, located some 700 kilometres north of the embattled Somalia capital of Mogadishu, witnessed fierce fighting when civil war erupted some 17 years ago.

But while southern and central Somalia are still plagued by fighting and uncertainty, a certain calm has descended on Puntland. Last year, UNHCR helped 105 Somali refugees living in Yemen go back to Puntland, while most Somali refugees in Djibouti were repatriated to another stable area - the self-declared state of Somaliland.

“I came here because my parents kept telling me about their past life in Somalia,” explained Hibo. “Even though I had never set foot in Galkayo before, everyone came to greet me when I arrived because they all remembered my family”

Hibo, who has found a country very different from the one described by her parents, feels she has a responsibility to help those who were left behind. “I have been able to study while the women who remained gradually lost their voice during the years of war, being offered nothing but marriage at an early age. I want to help all my sisters to study, so that they can have a good job or, if they stay at home, be able to support the education of their children,” she said.

Somali returnees have greatly contributed to the local NGOs that have flourished in Galkayo over the last 10 years. After spending four decades in Italy, Abdi Abdulkadir returned a few years ago to create Galkayo Medical Centre, the only clinic in Puntland that specializes in obstetrics.

“I decided to come back for good because I felt I had to give back part of what I had received,” said the doctor, who left for Italy in the 1960s after winning a scholarship from the World Health Organization.

Returning to Somalia has been a major challenge. “You cannot compare practising in Italy and in Somalia,” he said. “Here we have no real health care facilities, no machines, no drugs and we lack qualified medical staff.”

However the doctor makes a big difference in women’s lives. With almost all Somali women facing genital mutilation and infibulation, he is overwhelmed with patients who suffer from illnesses such as fistula and who encounter difficulties giving birth.

The lack of qualified doctors and nurses remains a major problem, though Abdulkadir claimed there were many skilled Somali medics oversees who were unable to practise in their countries of asylum. “We must tell these people that there is peace in Puntland, so they can come back where they are really needed,” he added.

He predicted that more Somalis would return. “Even abroad they have retained their identity and keep gathering with fellow Somalis. They will come back.”

Social worker Zahara is another of those who have returned, after Abdulkadir talked her into helping him at the clinic. “I came back [from her home in Switzerland] when I understood I would be more useful here than in Europe,” she said, adding that she wanted to help young Somalis who have known war all their lives. “They need someone from the outside to tell them that another life is possible, a life in which they would go to school, abide by the law and live in peace.”

Zahara believes that Somalis from the diaspora are key to stability. “Those who have remained within the country believe that peace can be obtained only by carrying a gun. Only the returnees can bring peace to the country, because they know what this word really means.”

A Doctor Returns to Somaliland.

After 20 years outside the country, Dr. Sohur Mire came back to Somaliland to work with MSF (Video)

Eng. Badrudin Sh. Hassan works at No 10 Downing Street as a VoIP Team Leader. He supports top officials at Downing Street, including the Prime Minister and the entire Cabinet Office. 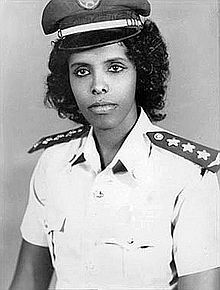 Do they have to be contemporary figures?

What about prominent Somalis who may not be well known outside the Somali Peninsula (people like Hadraawi)?

Sayyid Muhammad Abdulle Hassan- Founded what would be the only independent Muslim state during World War I and fought the longest guerilla war in Africa against four countries simultaneously whilst costing the British billions.