WARNING TO SOMALIS TRAVELING IN ETHIOPIA

If anyone of you have family members in region 5, advice them against traveling by bus or car, they should rather travel by air. the oromos are selectively targeting somalis, Jigjigga today is in mourning after 40+ mutilated bodies where brought back. the Oromo primates are cutting off womens breast, chopping people with machete and shower them in hot oil. the mutilated bodies i spoke of earlier are so disfigured, that they are gonna bury them in a mass grave.

be safe out there somalis

Sources? My family lives in jigjiga.

VIP
Tigray turned the oromos on the ogadens

Actually they killed a hundred. And they were mostly travellers

Somalis everywhere suffering guess that's the curse of the fircaun

Actually they killed a hundred. And they were mostly travellers
Click to expand...


No WEB news sources so far, i got the info by phone from a family member who works in the city, it wont be long before the news floods the web.

fox said:
Tigray turned the oromos on the ogadens

Hence "somalis be safe out there"

fox said:
Tigray turned the oromos on the ogadens

Oromos view all Somalis the same except for Raxanweyn.
S

Apparently a group of Oromos were killed and they got very angry and massacred every Somalis they could find.

So I think liyuu police killed them first.

Foreman said:
Oromos view all Somalis the same except for Raxanweyn.
Click to expand...

This is why a stable Somalia is in Somali galbeed's interest. They'd have no need of travelling further in to xabashland for their day-to-day needs. A xabash is xabash, no mattet amxaar or an oromo.

Allaha unaxariisto to all that have died.

Dheere said:
This is why a stable Somalia is in Somali galbeed's interest. They'd have no need of travelling further in to xabashland for their day-to-day needs. A xabash is xabash, no mattet amxaar or an oromo.

Allaha unaxariisto to all that have died.
Click to expand...

I agree with you but Oromos aren't habash
G 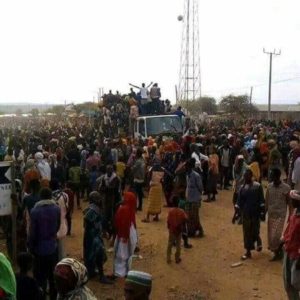 Two people were killed and several others wounded in the ongoing clashes between the Somali and Oromo communities in eastern Ethiopia as the president of the Somali region, Abdi Omar, reportedly decreed the Oromos to leave the region.

The Oromos held protest rallies in Aweday, Deder, Kobo, and Chinaksen towns today against the violent actions of the Somali Liyou Police that has been blamed for the death of several people in the ongoing turf war between the two communities.

Six cars, including a military vehicle, were set ablaze while transportations to Addis Ababa, Jijiga and neighboring towns were disrupted.

Information received by ESAT show several Oromos in Somali region were heading to the city of Harar following Abdi Omar’s order to leave the Somali region. Hundreds have taken refuge at eastern command military base.

Four students were injured last week when a grenade was thrown into a school in Meiso, Harar. Reports also say six people were injured in the ensuing shootout in the town.

The explosion came a day after a failed meeting between the two communities in which the Oromo representatives walked out in protest against a proposed map showing their land incorporated into the Somali region.

A communal clash has been going for few months now between the Oromos and Somali communities in west Hararghe where the Oromos accuse the Somali region special police forces have killed several of their people. There were also reports of killings of members of the Liyou police by the Oromos.

YoungFarah said:
I agree with you but Oromos aren't habash
Click to expand...

Anyone not Somali in that bakhti of a country is xabash and an enemy to Somalis.

Horta where is the border b/w somalis and oromos

The oromos may have the numbers lakin somalis have the mainland Somalia who can supply them with wepons if needed, iskaa dhiicya niimanka

Foreman said:
Oromos view all Somalis the same except for Raxanweyn.
Click to expand...

Because of our af maay?

VIP
Is all of the somali region really somali? Or did they include oromo areas?!? Or have oromos moved there after ethiopia took ogaden?!?

yuusufdiin said:
Because of our af maay?
Click to expand...

What does af may got to do with oromo? One is bantu language & the other is cushitic. Not even similar