US ties with Somali Government at unprecedented levels

“AFRICOM and the U.S. government support the Federal Government of Somalia, the people of Somalia, and the African Union and its mission to Somalia in their efforts to achieve sustained progress in governance, development and security,” said Waldhauser.

Gen. Waldhauser has also credited Somalia’s current administration for its efforts towards restoring peace and order into the long-chaotic horn of Africa nation.

“I’m proud of the strong relationship we have established with President Farmaajo and his government,” said Waldhauser, referring to the the Somali leader. “President Farmaajo and his administration have made measurable progress and it’s clear they are dedicated to reaching the goal of a safe, stable and prosperous Somalia.” He said.
A decade ago, such high-level talks inside Somalia involving top American officials were virtually unthinkable. U.S. military operations in the country were still a closely guarded secret and diplomatic efforts were minimal, given the widespread chaos in the country and the lack of a central government.

Prior to his meeting with the Somali president, Gen. Waldhauser met with the new U.S. Ambassador to Somalia Donald Yamamoto. Mr. Yamamoto is one of the highest-level U.S. ambassadors on the African continent, in what the US referred as a ‘symbol of the significance the U.S. places on its relationships with the people and government of Somalia’.

A great development. This is what competent leadership can bring to a country. Somalia is moving forward and with the blessing of God we will welcome even more developments and strengthen our cooperation with countries that can make an impact in Somalia. 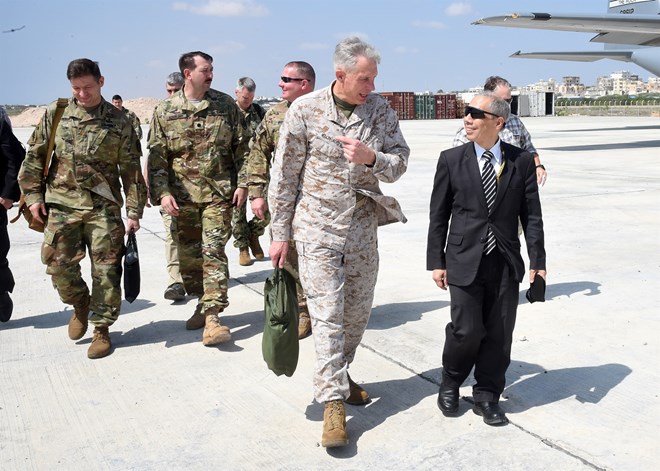 VIP
If the US really wants to help Somalia they should remove the arms embargo so that we could finally finish this 28 year old civil war.
D

With our partner and friend the US government sending the distinguished diplomat Mr. Yammamoto as the head of diplomacy between our two nations there are only great things to come. Honorable Mudane Farmaajo understands that we need powerful allies to support our goal for nabad iyo nolol (Peace and Prosperity) There is no better military mind in the continent of Africa than General. Waldhauser and him having these high level talks with our president to strengthen security and democracy in Somalia is welcomed by the Somali people wherever they may be.
The last time our two nations have had close ties was between the two greatest leaders either nations have come across. Jaale Siyad Barre and Mr. Ronald Reagan. We are at an opportune time in history to have an American citizen Mudane Farmaajo from New York and President Donald Trump also from New York to build a network that has a groundwork in ending extremism in East Africa by strengthening our ties.

He is literally a US citizen lol.

abdiwarrior said:
When I went to gaalkacyo there was a military camp that was trained by us called psf
Click to expand...

Trained by the US, or US troops?

National Warrior said:
Trained by the US, or US troops?
Click to expand...

Trained by the us