I am writing to bring to your attention the implications under the United Nations Human Rights Due Diligence Policy (UN HRDDP) arising from the alleged involvement of UN-supported Somali security forces in the arrest of Mukhtar Robow on 13 December, the deaths of 15 civilians and injuries of at least two others on 13, 14 and 15 December 2018, and the arrest of approximately 300 people involved in the demonstrations on 13, 14 and 15 December, 254 of whom were held without being charged beyond 48 hours and released between 18 and 22 December 2018. Most of the persons detained were reportedly children.

Article 127 (1-b) of the Provisional Constitution of Somalia (2012) provides that "security forces must respect the principles of the respect for the rule of law, democratic institutions and fundamental rights."

In addition, the successive UN Security Council Resolutions that set out the mandates of UNSOM and the African Union Mission in Somalia (AMISOM) direct that UN support to AMISOM and the Somali security sector must be provided in strict compliance with the HRDDP. The HRDDP requires UN entities providing support to Somali security forces to immediately investigate incidents that have implications under the policy and to bring allegations to the attention of concerned Somali authorities at the federal and regional level.

The UN provides support to the Somali Police Force (SPF) and the South West State (SWS) Police in Baidoa. The current arrangements for support include the payment of stipends to the SWS police and the SPF, and includes future support to the recruitment and training of as well as the provision of uniforms to 400 police recruits and the payment of stipends upon graduation; the construction of one police station and five police posts; upgrading the existing police training facility in Baidoa; the provision of 10 vehicles; police/community consultations; and training for station commanders. The UN delivers logistical support to 1,100 SNA members in Baidoa conducting joint operations with AMISOM, which comprise items including food, water and fuel, as well as communication support, field defence stores and medical evacuation when required. The UN also pays stipends to 453 members of the SNA 60 Division in Baidoa.
Click to expand...

I received a joint letter from the European Union, Germany and the United Kingdom (annexed herewith) announcing the suspension of their support to the SWS police through the Joint Police Programme (JPP). The letter, dated 21 December 2018, cites concerns with the conduct of the police during the election period in SWS, and the statements made by the SWS Police Commissioner.

According to credible sources, Mukhtar Robow was arrested by the AMISOM Ethiopian National Defence Forces (ENDF) contingent in Baidoa on 13 December. It is understood that he was briefly detained in the AMISOM Sector 3 Headquarters and then handed over to Somali security forces. The Director of the National Intelligence and Security Agency (NISA) for Baidoa district and the SWS Police Commissioner were reportedly present when Mukhtar Robow was placed on a plane and flown to Mogadishu. He is now reportedly detained by NISA in an undisclosed location.

I take note of the press release issued by the Federal Ministry of Internal Security (MoIS) on 13 December, according to which the grounds for Mukhtar Robow's arrest appear to be that he did not honour the conditions of his rehabilitation and that he deployed arms and militia to create disorder in the country, especially in Baidoa. I also take note of the press release issued by AMISOM on 15 December 2018, which states that "AMISOM had no part in the arrest of Mukhtar Robow and his subsequent transfer to Mogadishu."

If verified, the grounds for the arrest alleged in the MoIS press release may amount to serious crimes under Somali law. However, the Federal Attorney General has yet to file charges against Mukhtar Robow for these alleged crimes. Additionally, Mukhtar Robow has not yet appeared before a court, as required by the Criminal Procedure Code and Somalia's Provisional Constitution, which states that "[e]very person who is arrested has the right to be brought before a competent court within 48 hours of the arrest". Accordingly, the detention of Mukhtar Robow appears to be arbitrary.

Furthermore, the MoIS press release cited his failure to complete the terms of his rehabilitation among the grounds for his arrest. While Somalia has yet to enact an amnesty law, international law provides that amnesties must be established by law so as to avoid their arbitrary implementation and prevent impunity for the most serious human rights violations. The terms and conditions for the amnesty granted to Mukhtar Robow are unknown, and his arrest on the grounds that he has not completed the terms of his rehabilitation may amount to an arbitrary arrest.

Moreover, I received credible reports of at least 17 civilian casualties in the violence that occurred during demonstrations protesting the arrest of Mukhtar Robow held in Baidoa between 13 and 15 December 2018. Eleven civilians were reportedly killed on 13 December, three civilians (one woman, a child, and a member of the SWS Parliament) were killed and at least two others were injured on 14 December, and one civilian was killed on 15 December.

The SPF, the SWS police and the SWS Special Police Force were deployed in Baidoa on 13, 14 and 15 December 2018 and responded to the protests. AMISOM soldiers were reported to have been deployed during the three days. I also received reports that tyres were burnt, rocks were thrown, and that there were exchanges of
Click to expand...

gunfire between the SPF, the SWS police, the SWS Special Police Force and unidentified individuals, some reportedly wearing civilian clothing and others dressed in uniforms. The civilian casualties may have resulted from crossfire during the exchange. Members of the SNA were also reported to have been present on 14 and 15 December 2018, but it remains unclear whether they were involved in the exchange of gunfire.

While international law does not prohibit the use of force by law enforcement agents, the State and its agents are obligated to ensure that the decision to use force complies with the principles of legality, precaution, necessity, proportionality and accountability. Additionally, an individual's right to peacefully assemble in a demonstration does not cease because of sporadic violence that may be committed by others.

It is unclear what precautionary measures the SPF, the SWS police, the SWS Special Police Force and the SNA had in place to prevent civilian casualties while dispersing protestors, whether the use of lethal force was necessary and proportional considering the circumstances during the demonstrations, and whether there was a system in place to regulate the gradual use of force, including up to lethal force.

The UN has also reviewed a videotaped interview of the SWS Police Commissioner allegedly given on 12 December 2018 and reportedly related to the 11 December protests in Baidoa, which were linked to a motion to impeach the President of the Federal Government of Somalia (FGS). In the video, the SWS police commissioner stated that "I want to tell you that if you participate in a demonstration that we were not informed [about] and you support something bad, we will shoot you in the a** and the law allows for them [police] to kill you [demonstrators] ... no demonstration can take place in Baidoa without informing us [police]" and that if demonstrators "do good things, we [the police] will be good and if you [demonstrators] do bad deeds, we will respond with a bullet."

While they were reportedly not made in the context of the protests of 13-15 December 2018, the statements of the SWS Police Commissioner may be perceived as justifying the use of lethal force regardless of the circumstances of a demonstration. His declarations therefore raise serious concerns over the security forces' compliance with the principles of legality, necessity, proportionality and precaution when using force.

As you know, the rights to life, to freedom of assembly, demonstration and protest and to personal security are guaranteed under Articles 4, 13, 15(2), and 20(1) of the Provisional Constitution of Somalia (2012). Arbitrary deprivation of life and deprivation of liberty and unreasonable restrictions on the exercise of the right to peaceful assembly are also prohibited under Articles 6(1), 9(1) and 21 of the International Covenant on Civil and Political Rights (ICCPR), to which Somalia is a party.
Click to expand...

Therefore, I would be grateful for your response to the following questions:

Regarding the arrest and detention of Mukhtar Robow:

lf action has not yet been taken, I urge that the matter be thoroughly and promptly investigated and that appropriate action is taken to hold any perpetrators, including commanding officers, accountable.

My office is ready to provide you with the necessary support as you act on this urgent matter. I have also addressed a letter to the SWS Minister of Security communicating these allegations and seeking similar information, including on actions taken to investigate the allegations.

Furthermore, I have written to AMISOM and the Embassy of the Federal Democratic Republic of Ethiopia in Somalia communicating incidents related to the alleged involvement of AMlSOM and Ethiopian troops in the events of 13-15 December 2018. Those letters requested information on what actions have been carried out to investigate their involvement in the allegations and to provide feedback on the findings of any inquiry that the AMlSOM and Ethiopia should undertake in this regard.

Please accept, Excellency, the assurances of my highest consideration. 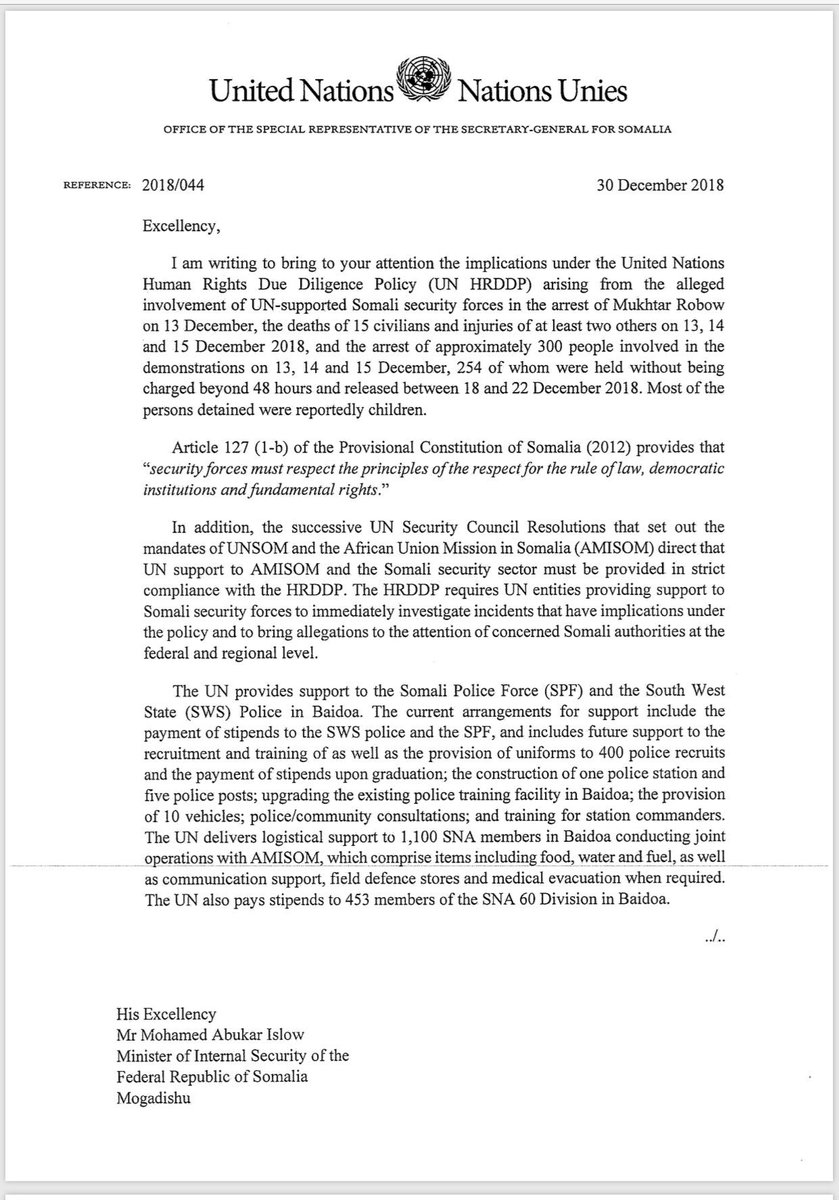 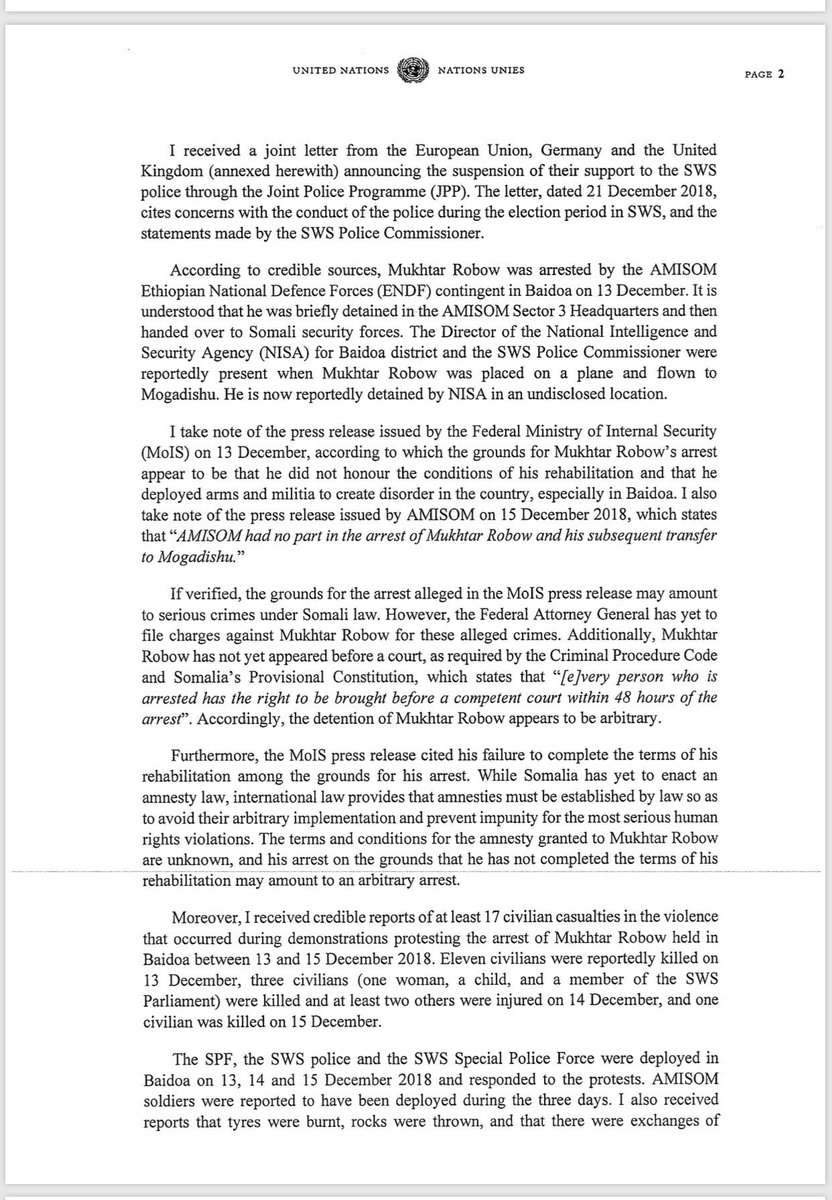 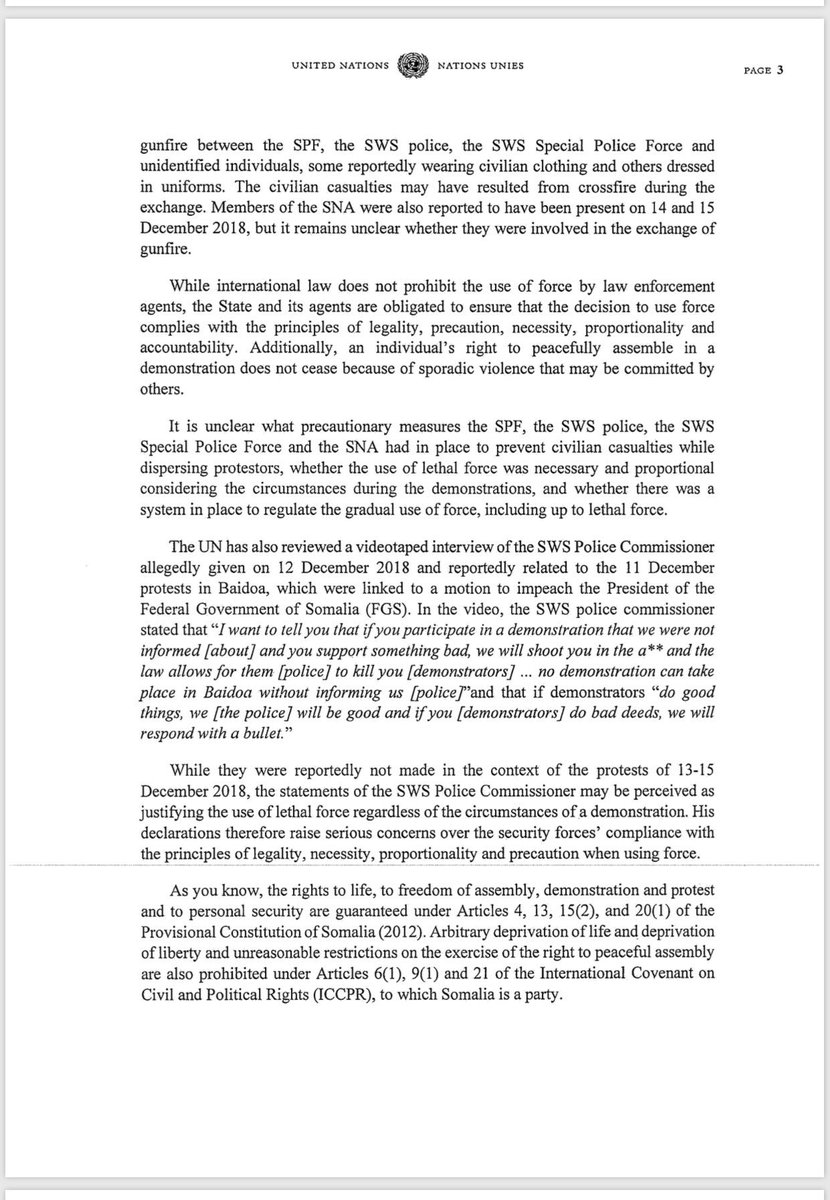 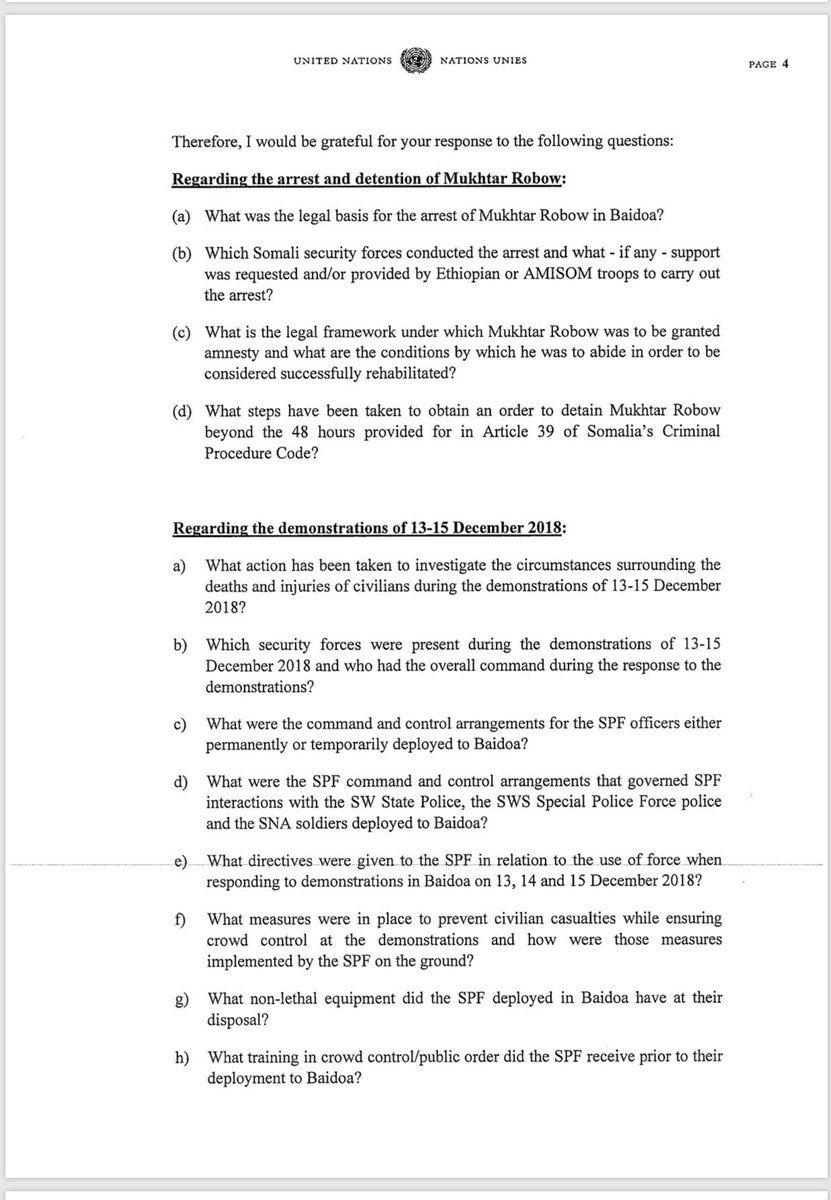 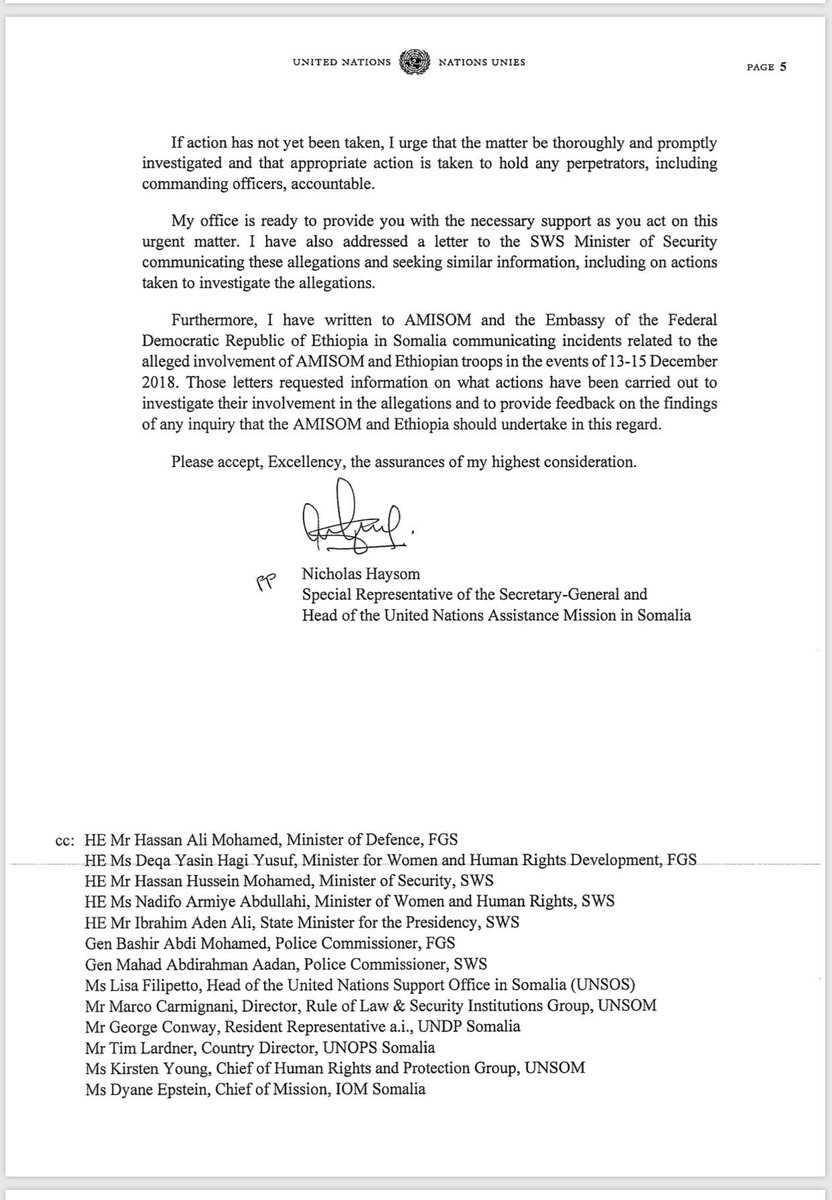 Staff Member
Mukhtar Robow deserves to be in a shallow grave somewhere. How is this man allowed to continue
breathing?

They should kill that terrorist and get it over with

Thegoodshepherd said:
Mukhtar Robow deserves to be in a shallow grave somewhere. How is this man allowed to continue
breathing?

Mogadishu gave him amnesty like they do for every terrorist that combs their hair, puts on a tie, and says they're sorry. He undoubtedly had a top position waiting for him in the FGS as well but he decided to challenge Farmajo instead. The rest is history.

World said:
f*ck the UN They should kill that terrorist and get it over with
Click to expand...

Why kill Robow after parading him around as a changed man for a year but leave his old terrorist buddies to oversee the country's intelligence apparatus? If you can't see the underlying politics behind what's happened here, then you can't be helped.
Last edited: Jan 1, 2019

They should kill that terrorist and get it over with
Click to expand...

The good old US of A way f*ck the UN

VIP
Side with the khawarij that killed thousands of innocents to own farmaajo. War na dhaaf

VIP
The UN doesn't want a strong Somali government to reemerge from the ashes. f*ck them.

TekNiKo said:
The UN doesn't want a strong Somali government to reemerge from the ashes. f*ck them.
Click to expand...

more like they don't want their tax money spent on actions they don't agree with which is fine.

They have overlooked crimes done by AMISOM for years. UN like everyone involved in Somalia has its own agenda.