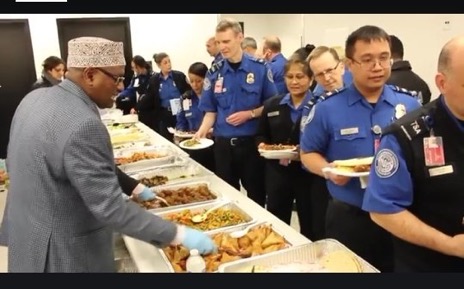 link to article my good friend looks like a good read

It’s a private picture that made to my inbox and it hasn’t been published yet, consider it a scoop for Somalispot. I wished Somalis knew how to take advantage of such positive news about our goodwill to others and publicise it to the maximum to benefit the image of Somalis everywhere.

Let’s make this picture trend in all social media outlets that each one of us use with the caption of; (Feel free to create your own)

VIP
@AussieHustler Is it in MN?

VIP
They aren’t our charity. Somalis are still starving and they wanna be helping foreigners. If they only put the time and effort in helping their people.

Daughter of samaale said:
They aren’t our charity. Somalis are still starving and they wanna be helping foreigners. If they only put the time and effort in helping their people.
Click to expand...

You are right but on this topic, you are mixing apples and oranges. America and American tax payers have helped 10’s of thousands of Somalis resettle in the U.S and there is nothing wrong with a Somali American entrepreneur returning the favour to help his fellow Americans. As you’re well aware of, Donald Trump hasn’t only demonised Somalis during the elections and as president, he called Somalia a ‘shitty place’, but the worst part of his hatred towards Somalis is that he instituted a legislation to bar Somalis migrating to the United States. This is a brilliant opportunity to counter such hatred by showing the Americans that Donald isn’t only an enemy to Somalis but to the Americans as well and Somalis care about their fellow ordinary Americans. Though it’s a marketing coup for the owner of the business, it also enhances the image of Somalis everywhere which is tarnished by the right wing media and the behaviours of some Somalis.

Every decent Somali donates to charities helping Somalis during severe droughts or not. Most of these tragedies are man made, we have two mighty rivers, plenty of arable land & the longest coastline in Africa that couldn’t only feed Somalis everywhere, but if farmed or fished to it’s potential, Somalia could become a major hub as a food exporter. The best way to fight hunger in Somalia is Somalis to abandon the clan wars immediately, but that won’t happen in foreseeable future. Till then, Somali people will be dying of hunger because they prefer clan wars instead of producing enough food to eat and living comfortably. If this trend continues for a decade or longer, people would just give up and say, we can’t help them anymore if they insist in choosing to create these conditions for themselves again and again. Who’s to blame? Don’t blame this cafe owner doing what he feels is right.
Last edited: Jan 30, 2019

Why didn't this blow up