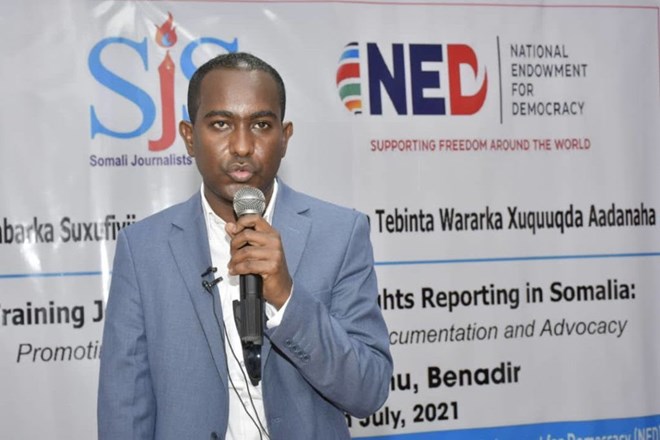 The Somali Journalists Syndicate (SJS) officially launched the first of a series of human rights trainings for Somali journalists in Mogadishu, on Wednesday, to build the capacity of journalists to cover human rights issues in Somalia.

The training project, which is supported by the National Endowment for Democracy, aims to equip local journalists with new skills and enable them to collaboratively monitor, investigate, document and report human rights violations in the country. The project intends to reach up-to 150 journalists across Somalia.

The trainings will serve as the foundation upon which SJS establishes and mentors a network of journalists covering human rights in six regions across Somalia.

Abdalle Ahmed Mumin, the Secretary General of Somali Journalists Syndicate appealed to journalists and editors of media houses to prioritize human rights coverage in their local and national coverage and to use the skills learned during the three-day training.

“Journalists can play a major role in protecting and promoting human rights. They can make people aware of their rights, expose violations, and help victims of human rights abuses to pursue their case till they achieve justice,” said Abdalle Ahmed Mumin, SJS Secretary General “Somali journalists continue to this struggle to report issues of public interest, but many lack the skills and tools to report professionally.”

“With the support of the National Endowment for Democracy (NED), we aim to build the capacity of journalists and editors on human rights principles. We hope to see a change in the media agenda and prioritize issues affecting human rights in the country,” Mr. Mumin adds “At the end of this training we’ll have an established network of human rights journalists. We’ll support them, provide them the mentorship and advice they need in order to increase their reporting capacity.”

At the opening ceremony on Wednesday, lawyers, media representatives and editors from the most recently targeted media stations were in attendance. About 25 reporters and editors from various media based in the capital, Mogadishu, will benefit from the first cycle of training followed by other trainings in other parts of the country.

“Trainings like this will give women journalists access to untold stories and enable then to report objectively and timely because they will get the skills and tools they need. I really thank SJS for bringing this human rights issue to the table,” she adds.

Hinda Dahir, an SJS gender rights defender, recounted how many local journalists have struggled to find training tailored to their specific needs, including those about research and documentation of human rights violations.

“Women in Somalia face all types of abuse, including rape and discrimination which remains underreported. Journalists participating in this particular training will learn how to report on all types of human rights, including violence against women,” she adds “It will help to speak for the victory of human rights. We hope to see an improvement in the human rights situation in the country while helping local reporters with reporting skills they needed much,” said Hinda Dahir. 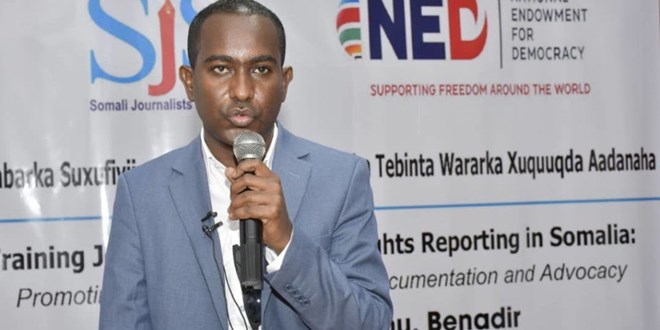 The Somali Journalists Syndicate (SJS) officially launched the first of a series of human rights trainings for Somali journalists in Mogadishu, on Wednesday, to build the capacity of journalists to cover human rights issues in Somalia.