What y'all think about this video this brother made?

VIP
The picture from 0:50 is of the Sultanate of Migiurtinia (Hafun), not the Ajuuraan Empire.

As for the video, Queen Araweelo wasn't real. A Queen born in 1580 who castrated 90% of men and we have no evidence she ever existed? Who believes in these fairytales?

I wonder what qabiil she was?

The guy who did the video follow somali SJWs on twitter and he is famous for his pseudo history and pro black Afrocentric spewel.

For instance, the ancient Greeks never called Ethiopians and somalis black , they called us red people.

He is says differently in the video with his revisionist crap

He really wants somalis to be recruited into his stupid negro-send-trick fantasy.

Here is him responding to mango dissing somali men again. 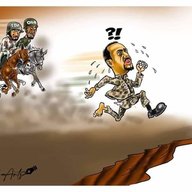 Staff Member
Arawelo might have been the axumite empress yodit.
https://en.m.wikipedia.org/wiki/Gudit

Sensei said:
The picture from 0:50 is of the Sultanate of Migiurtinia (Hafun), not the Ajuuraan Empire.

As for the video, Queen Araweelo wasn't real. A Queen born in 1580 who castrated 90% of men and we have no evidence she ever existed? Who believes in these fairytales?

castration was punishment, she did not castrate 90% of men but those who opposed her

She is more real then those immigrants from yeman and iraq

VIP
I wonder how she looked, although I get annoyed seeing this balloon heads video getting shared everywhere, but let's be honest if a Somali made such a video it would not be shared at all, Soomalidda caqli xumaa. When K'naan gives them a shout out it doesn't matter, but when Drake mentions them, they get wet. When Somalis have been making videos about their history it doesn't matter, but a sanweyn talks about it, it's special and they re-share it like clowns. Somali's self-hate runs deep in their blood ever since they claimed some imaginary Arabs fathered them.

VIP
If the stories about her are true, then she wasn't an admirable queen. She was a misandrist maniac

Her grave is in Northern Somalia but no-one is sure if she's buried there or if it's just a symbolic grave. She was real but she was not a queen, she was more of a pre Islamic suffragette. The bit about her cutting off male organs was added to enhance the story, the term 'ball breaker' comes to mind. Its unlikely she chopped off a single penis but it is said that men threw stones at her grave and women laid branches and flowers by her grave.