(ERGO) – Determined to avoid the high costs of preparing his farm in Jowhar, Hassan Ali Addow, a mechanic, built his own tractor using recycled car parts and a water pump.

Hassan, 52, borrowed $2,000 from relatives and took four years to complete his tractor. It cost him $4,500 in total and he has yet to repay the debt, but he estimates that it will save him money in the long run.

Hassan’s tractor has one piston and uses fuel economically to carry out multiple functions, including ploughing, ***ing, and sowing seeds.

“It has a *** to dig narrow furrows and shallow trenches for planting the seeds. It also has a ploughing tool to turn the soil before sowing the seeds. I also designed it with a tool to till the farm and two buckets on either side of the tractor, where seeds are dropped into the prepared soil,” Hassan explained.

Hassan, a father of 13, owns a small garage in town and has worked for 40 years as a mechanic. He builds machines such as maize grinders on order, helped by his eldest son and his brother, both of whom he has trained on the job. 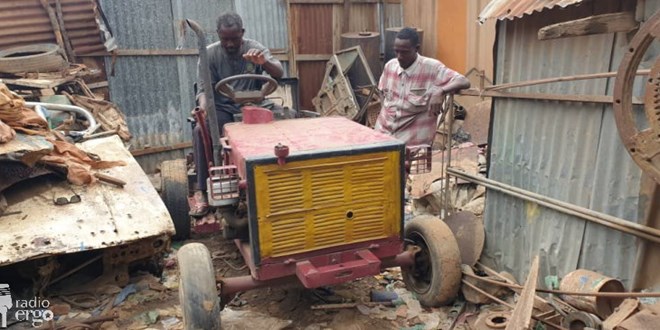 (ERGO) – Determined to avoid the high costs of preparing his farm in Jowhar, Hassan Ali Addow, a mechanic, built his own tractor using recycled car parts and a water pump.

Not surprised that he's Bantu, they seem to be more creative and productive than Somalis.