Cognitivedissonance said:
Is that why you begged murusade to come take land in garacaad same way cumar maxamud allowed habar gidir to settle in galkacyo who claim the whole of galkacyo today, it seems cumar maxamud dont learn from their mistakes 10 years from now murursade will claim garacaad

You forget that Garacad is a 100% Cabdi Ciise tuulo. The other Omar Mohamud subclans aren't there to protect them. We can carry out a pogrom at any time without our softer bethren staying our hand. I'm not worried at all.

Crow said:
You forget that Garacad is a 100% Cabdi Ciise tuulo. The other Omar Mohamud subclans aren't there to protect them. We can carry out a pogrom at any time without our softer bethren staying our hand. I'm not worried at all.
Click to expand...

You are accusing hawiye of being moryaans yet you want to give them a land in garaacad so they can invest in the building of garaacad port, I am confused if they were moryaan then why do you want them in garaacad?

Farm said:
30 years later and nothing has changed you can’t make this shit up.

What I was saying the other day the accuracy is incredible 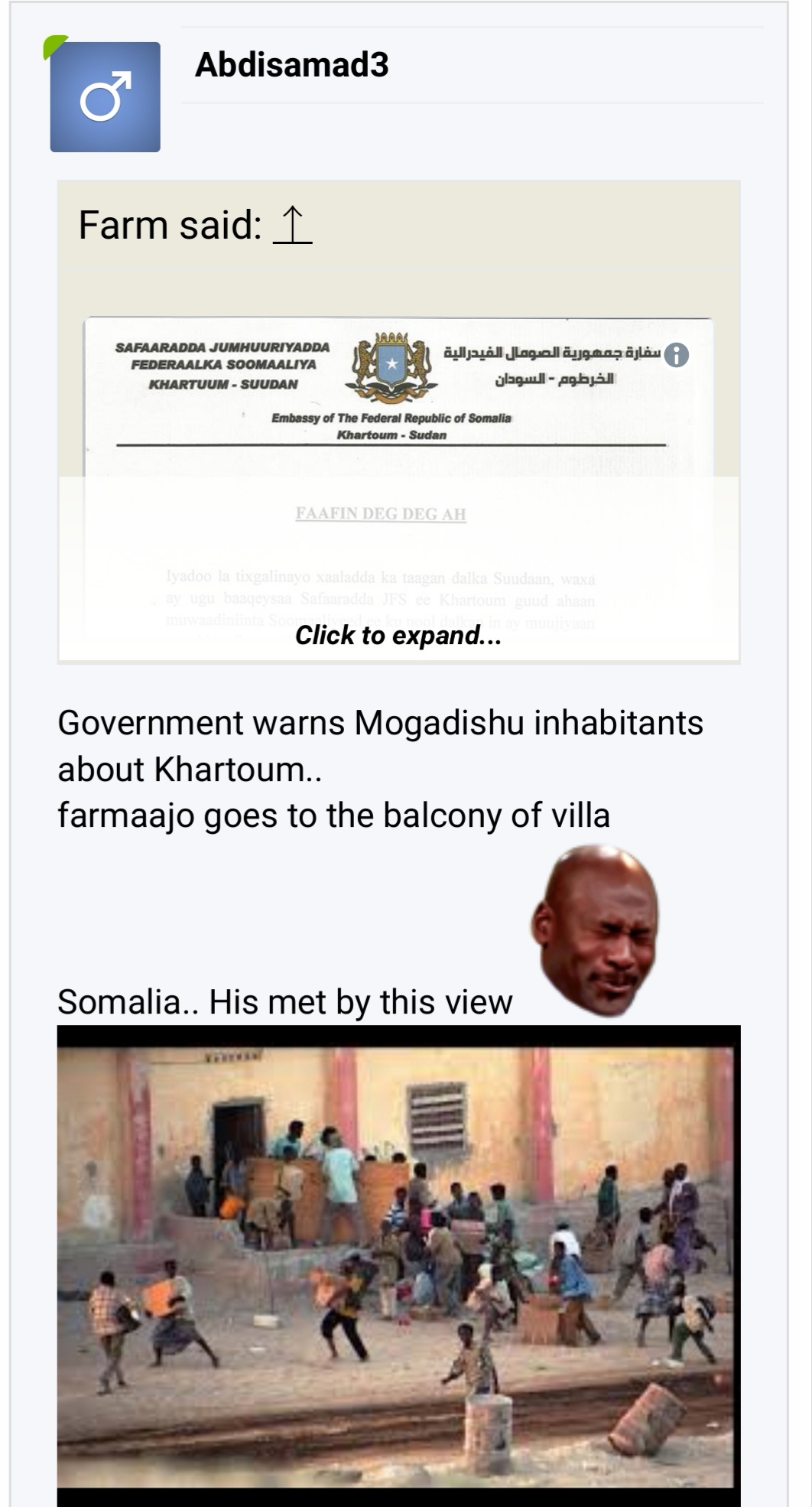 you don't need to turn this into qabyaalad fadhi ku dirir.
casimadaal /Capital city will always be a shared city.
No one has stolen from hiraab-
since 1960 ,majority of somali land was in the hand of the gov.
Muuse suudi th warlord occupies illegal prime land owned by the gov.

example abaartii dabadheer- siyaad barre took many people from north to south and gave them farmland.

My good freind habar jeclo- his family were given few acre to farm in Balcad- and over the years- they have increased their land to 50 acres.

Many Mj have lost huge wealth and properties they owned in muqdisho during the civil war.
waa lacag ay ayaga shaqesteen MJ.

majority of the land was owned by the gov period.

the topic is- in caasimada in laga raro Muqdisho.

Prof.Dr.Eng.
VIP
We heard about it, we saw footage, we read about it, but now we can watch chimp out live

The poor Bajaaj drivers get gunned down for sport by soldiers in uniform, this government have been punishing reer Muqdisho lately me think of it as an act of retaliation for 91, anyways I applaud them for taking the matter into their own hands no more boli qaran for reer Gedo

Duuqa magalada came out to the protesters and ensured them that the people who were behind the deaths of the drivers has been apprehended. Also reiterated that the safety and security of the city does not only fall on the forces, but the citizenry has to play an integral role in ensuring that spoilers don't instigate attacks on business owners and start tire fires in the streets.