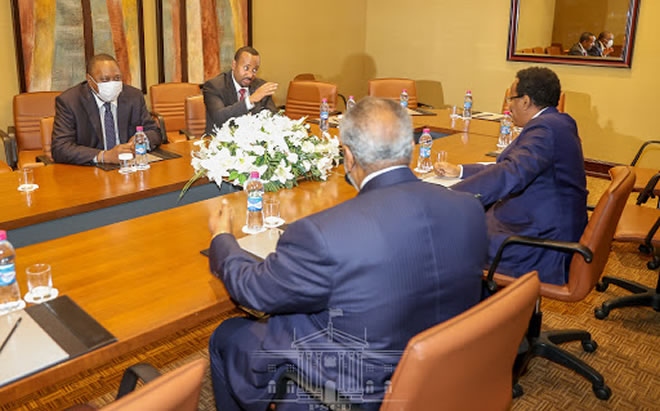 President Uhuru Uhuru Kenyatta in a meeting with his Somalia counterpart Mohamed Farmajo during IGAD's Summit in Djibouti - Image: PSCU

The rift between Somalia and Kenya has been left out of the agenda discussed at the 38th extraordinary summit of IGAD. Instead, the matter was discussed on the sidelines of the summit. The final communique made no mention of the rift between Mogadishu and Nairobi, on the contrary, they encouraged Somalia to focus on the local elections, consensus building with other stakeholders, and security. The aggressive actions against Kenya were an enormous diplomatic debacle by the Somali government under the leadership of Mohamed Abdullahi Farmaajo.

Somalia has severed diplomatic ties with Kenya in the past few weeks in a series of actions the government took in protest of what the government termed as an interference of the internal affairs of the country. Somali Federal Government asked Kenya's diplomatic mission to leave the country in seven days and called its diplomats in Nairobi to return to Somalia.

Somalia also threatened to expel Kenya's Defences Forces from Somalia. (KDF is part of AMISOM Troop Contributing Countries to Somalia) Similarly, Somalia wrote to IGAD chairman Abdalla Hamdook, the current President of Sudan a formal complaint about Kenya. In the formal complaint Somalia requested to include the tiff between Kenya and Somalia in the formal agenda of the submit.

The question that begs an answer is, do the actions the Somali government took under the leadership of President Farmajo justify severing ties with Kenya? Were there other avenues other than fabricating hostility with a neighboring country?

The outcome of the IGAD summit was diplomatic embarrassment, ignominious, and demeaning for the government of Somalia. The outcome was predicted by the scholars of international relations for the following reasons. The SFG’s allegations against Kenya are politically motivated and meant to suppress Jubaland, and opposition leaders. We are all aware that the Federal government of Somalia has been amassing troops in the Gedo region of Jubaland since last year to fully control the region.

The main reason is to deprive and strip President of Jubaland Ahmed M. Islam (Madobe)of influencing the selection of the members of parliament that come from the Gedo region.

President Farmajo and his former prime minister Hassan Ali Khayre succeeded to put allied presidents on the Regional states of Galmudug, southwest Somalia, and Hir-Shabelle. A process that took tens of millions of dollars and in some instances led to bloody confrontations.

Jubaland and Puntland remained the only two regional governments that stood firm to Farmaajo’s ambitions. In an attempt to hide the nefarious intentions of Somali leaders, they created a pseudo war with Kenya. This tactic might work in arousing the nationalistic sentiments of the public, but negligible at international forums such as the IGAD summit.

Somalia also accused Kenya of hosting opposition leaders in Nairobi and running their campaign from Kenya. It is worth mentioning President Farmajo himself launched his campaign contending for the top seat in Somalia from Nairobi back in 2016. Kenya is home to a large number of Somali refugees and Somali diaspora and they consider it as their second home.

Another charge was hosting the President of Somaliland in Nairobi. (Somaliland is a self declared country and seceded from Somalia in 1991) In this case, Kenya is not the only country that developed warm relations with the breakaway country. So, how did IGAD leaders handle the above-mentioned allegations against Kenya?

All the issues Somalia complained about were excluded from the main agendas of the summit. They discussed the issues on the sidelines of the summit. President Mohamed Abdullahi Farmajo and his team were summoned to reopen the diplomatic relations with Kenya. They were also told to solve their issues amicably through dialogue with Kenya and opposition leaders. Instead, they encouraged them to focus on the local elections and cooperating with other stakeholders, and the fight against Al-Shabaab. Mousa Faki at one point reminded Somalia that Kenya is a troop-contributing country to Somalia and hosts a large number of Somali refugees.

An indication that can be translated, Somalia must amend the broken diplomatic ties with Kenya and recognition of Kenya’s role in the stabilization of Somalia.

Somalia lost its war with Kenya diplomatically, at least on the regional level. A lesson learned in abstaining from mixing local politics with international relations, stop acting on emotions and without clear objectives and guidelines.

Somali leaders must look at issues carefully and stop acting hastily. We are recovering from the civil war which begs dialogue, consultation, and compromise. One person cannot dictate on the rest which path to follow for a better future of our country. Compromise is the key to complete reconstruction and rebuilding our country’s institutions.

Abdirizak M. Diis
Email: ibnmursal49@gmail.com
The author is an academic and International Relations expert and East Africa political Analyst based in Minneapolis. 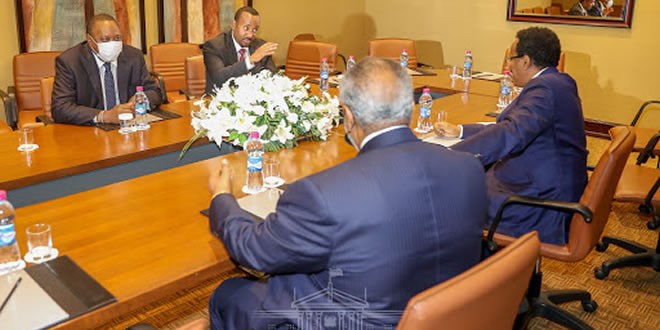 The rift between Somalia and Kenya has been left out of the agenda discussed at the 38th extraordinary summit of IGAD. Instead, the matter was discussed on the sidelines of the summit. The final communique made no

Removed said:
@kickz Hows life make sure you dont off yourself till february