Biggest propaganda from Wikipedia about the Somali civil war.

https://en.m.wikipedia.org/wiki/Isaaq_genocide
This article is purely one sided propaganda. Anybody getting information from here should know they're being grossly duped with fake historical facts about the Somali government and the various rebel groups in the 80s.
To begin with this below, the article States: 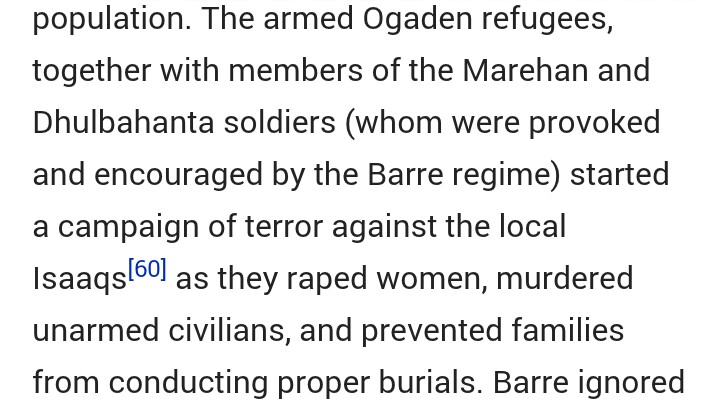 This is pure nonsense, the Somali army comprised all clans, only the inner circles of government and the regimes special force (red berets) had the above mentioned clans dominant. Most red berets weren't even deployed to deal with SNM, they mostly protected the capital and the regime in the South.
The article further States: 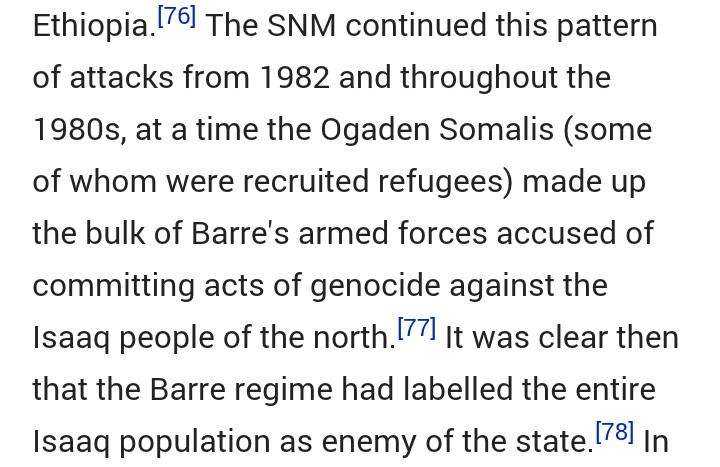 So by 1982, the above mentioned clan had made up the bulk of the army and began genociding northern Somalis. Another 100% lie, it was by late '87 that it became dominated with members of the above not 1982. 1986 is when the regime turned tribal based proper but according to this article ever since 1969, the government began segregating others. Ask anyone who was alive at the time and they'll prove me rright.
Articles like this is what makes some clans have cuqdad for others. Shame on Wikipedia.

Staff Member
The policy of wikipedia has become stricter over the years. Now when someone disagrees with your edit it can sometimes take weeks of debate and internal admin review/approval before any controversial piece is added.

This keeps the fanatic editors in, while your average joe editor loses interest.

You are Kenyan, stick to Kenyan affairs

This is history that involved all Somalis.
SRC was a pro somaliweyn regime. All Somalis even those outside the Union Somalia borders were citizens of that regime
A

Let's be honest, Barre did try to wipe out the isaaqs so he can settle the Ogaden who were occupied in Somali galbeed in north Somalia.

GABAN said:
Let's be honest, Barre did try to wipe out the isaaqs so he can settle the Ogaden who were occupied in Somali galbeed in north Somalia.
Click to expand...

That was in late 1988, by then the regime had lost all credibility and was a darood militia

Its well documented with 200 reference https://en.wikipedia.org/wiki/Isaaq_genocide#References

Read the debate they had in talk page.
A

JamalNFD said:
That was in late 1988, by then the regime had lost all credibility and was a darood militia
Click to expand...

it was before 1988 because that is when Isaaqs stood up and had enough with refugees killing them. Plus the article has sources.

Stay WOKE
VIP
I don't understand why a Kenyan wants to cause division between the people of Somalia.

Read the debate they had in talk page.
Click to expand...

There are references for Flat Earth Theory as well.. doesn't mean it's real. The wording 'genocide' is biased.

GABAN said:
it was before 1988 because that is when Isaaqs stood up and had enough with refugees killing them. Plus the article has sources.
Click to expand...

JamalNFD said:
Are u claiming the army only had marexan and dulbahante soldiers as this article states
Click to expand...

The armed ogaden together WITH marexan and dhulbahante soldiers
Click to expand...

that don't mean the army was Marexan and Dhulbahante

The settlement of Ogaden refugees in Isaaq territory, and the arming of these groups (which effectively created a foreign army in the north[59]), further antagonised local Isaaq population. The armed Ogaden refugees, together with members of the Marehan and Dhulbahanta soldiers (whom were provoked and encouraged by the Barre regime) started a campaign of terror against the local Isaaqs[60] as they raped women, murdered unarmed civilians, and prevented families from conducting proper burials. Barre ignored Isaaq complaints throughout the 1980s,[61] this along with Barre's repression of criticism or discussions of the widespread atrocities in the north[62] had the effect of turning the long-standing Isaaq disaffection into open opposition.
Click to expand...

Why were you reading about the isaaq genocide?

Amun said:
There are references for Flat Earth Theory as well.. doesn't mean it's real. The wording 'genocide' is biased.
Click to expand...

ethan bradberry said:
Why were you reading about the isaaq genocide?

Duh, coz its on the net and it was putreadingr people to read.
And I'm going to Somaliland in less than 3 weeks time and I've been interested in reading the civil war in the north recently.
I've got no other agendas, just expanding my knowledge

AF NAAREED
VIP
This is honestly just northern garbage and can't get past wikipedia and other online basement blogs. It will always be just the voice of one isaaq guy that is pissed off in some basement and that's as far as it will go. As for coming with that shit to a true somalia/somaliland conference, you simply wouldn't survive any sort of intellectual engagement.

What is the siyad barre govt supposed to do with those clan rebels fighting for clan-ism which were funded by an 'enemy' state!!!! does he just sit back and let them take over the country's sovereign territory? imagine if black lives matter started arming itself and was funded by russia, do you not think for one second the american army would blow the shit out of them? Infact they did. When al-qaeda attacked the twin-towers, america responded with blowing the shit out of afghanistan who were harboring these 'terrorists'.

The northern region was habouring terrorists and Siyad Barre did what any state would've done, PROTECT it's borders from rogue terrorist elements. They were the ones who picked up the gun first, not the government. They should accept ultimate responsibility not the Somali govt!!!

AF NAAREED
VIP
Just imagine I pick up and gun and start shooting the police? and then hid among my family in their house!!! you think I can come back and say to the police why did u shoot me and my family!!! Tribalism is one thing but reality is another!!! I hope these clowns in the north don't actually come with that washed up argument. Your best bet is to argue about what truly you want and it's power-sharing!!! At least then we can discuss your real problem not some made up problem which can be easily refuted where-as real problems are harder to refute!!!

VIP
I'm not sure about it. It does seem sus that they were only settled to non darod regions.

But there are many many videos of the Ogaden refugees and they were emaciated and barely look human. Its really difficult to watch. They look a lot worse than any video of the famine victims now or in the 90s.

Like all historical 'facts' about the civil war we will never know.

JamalNFD said:
Duh, coz its on the net and it was putreadingr people to read.
And I'm going to Somaliland in less than 3 weeks time and I've been interested in reading the civil war in the north recently.
I've got no other agendas, just expanding my knowledge
Click to expand...

Alright. You going to hargeisa?