Big up to my fellow Canadian Mohammed Ahmed.

He is still young and holds the record of Canada. 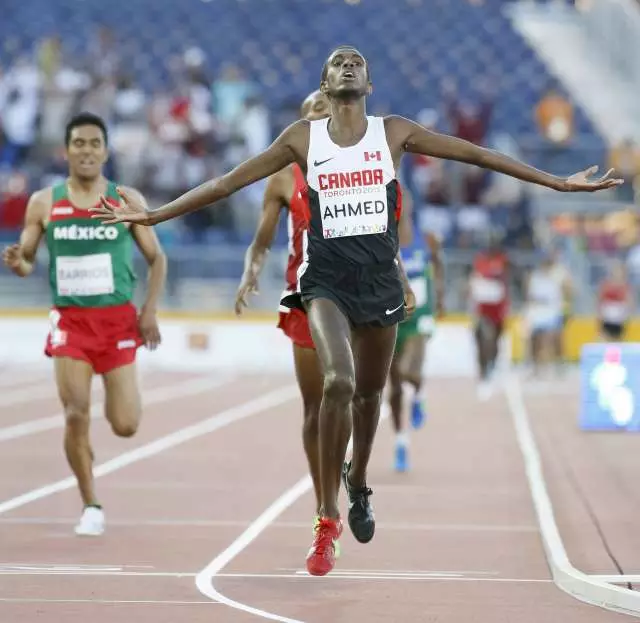 Mohammed Ahmed of Canada reacts after the the men's 10,000 metres final during the IAAF World Athletics Championships at The London Stadium on Friday in London.Richard Heathcote / Getty Images

The 26-year-old from St. Catharines, Ont., laid down Canada’s finest performance over 10,000 metres at the world championships on Friday night, crossing in a national record time of 27 minutes 2.35 seconds. But moments after the race, his slender legs still wobbly from the effort, Ahmed said he’s thinking well beyond being Canada’s best.

Hometown favourite and Olympic champion Mo Farah raced to his third world title in 26:49.51, to the delight of 55,000 fans, whose roar reached ear-splitting levels when the Brit glanced over his shoulder to pull away with about 150 metres to go.

Day 1 of the worlds was supposed to be all about Andre De Grasse and his quest to topple Jamaican great Usain Bolt from his throne, but the Canadian sprint star was forced to shut down his season after straining his hamstring in training Monday.

So Ahmed played the starring role for Canada, a year after he finished dead last in the Rio Olympic 10,000.

“I’m the Canadian 10K junior record-holder, I’ve always thought of myself as a 10Ker, and last year was a big motivation to come back this year, and kind of take revenge a little bit,” said Ahmed, who topped Cam Levins’ record of 27:07.51 set in 2015. “I wanted to ball, I wanted to have fun, I wanted to fight. I did that, it just wasn’t enough.”

Ahmed rebounded in Rio to finish — a Canadian-best — fourth in the 5,000, and said his ability to stick with the best in the world filled him with confidence. It showed Friday night at London Stadium, as the Somali-born runner stayed with the lead group — as high up as third spot — for all but Lap 25 of the 25 laps.

Records are rare in championship races because they’re more tactical than fast. Friday’s race ignored that tendency, and Ahmed was stunned after running a 28-second personal best.

The final few laps were a crazy blur of surges and lead changes, with runners hitting the accelerator to sprint to the front. There were elbows thrown, shoves in the back, and clipped heels, and Farah nearly went down with 300 metres to go en route to winning his 10th consecutive global distance title.

“Every bump that I took I was like ‘Alright this is part of it, just gotta take it, and keep rolling with it,’ ” Ahmed said. “The last four or five laps, the surging of the race really got to my legs and I was in a bad place with like six laps to go.

“I was telling myself ‘Fight, compete, fight, compete.’ Every lap. I did that, I hung on, I just didn’t have quite enough over the last lap. That last lap was absolutely brutal.

Ahmed, who said he’s the lightest he’s been in a long time at “a strong 119 pounds,” bent at the waist while speaking to reporters, hanging one arm over a barrier to prop himself up. He planned to head straight to the Canadian physiotherapy staff, to get ready for the 5,000 metres on Aug. 12.

“I’m in a bad place right now, my legs are really tired. Cut up, a lot of blisters I’m sure underneath these spikes,” Ahmed said.

In the absence of De Grasse, Canada will have no one in the 100-metre final as Canadians Gavin Smellie and Brendon Rodney were both eliminated in the heats.

On the heels of his thrilling three-medal performance at the Rio Olympics, De Grasse had been intent on giving Bolt a run for his money in the Jamaican superstar’s final individual race. Instead, De Grasse, and Canadian track and field fans, are left to wonder what if?

Bolt cruised to an easy 10.07 to win his heat. Jamaican Julian Forte ran 9.99 for the fastest time of the night.

“It was brilliant,” Bolt said of the London Stadium crowd. “They come out in their numbers.”

The stadium announcer mentioned De Grasse several times, including right before what would have been his heat, saying “Andre De Grasse would have been in Lane 9, but sadly withdrew from injury in the last 36 hours.”

Elsewhere, Gabriela Stafford, a 21-year-old from Toronto, ran a personal best 4:04.55 to finish seventh in her heat of the 1,500 and advance to the semis. Nicole Sifuentes of Winnipeg (4:05.24) was eighth in her heat and also advanced.

Ethiopia’s Genzebe Dibaba had the fastest time of the night of 4:02.67, while South African Caster Semenya was second (4:02.84). Semenya will be the favourite for gold in the 800 metres.

Canadians Alysha Newman and Anicka Newell also booked their spots in the women’s pole vault final. Newman, from London, Ont., cleared 4.55 metres, while Toronto’s Newell was good over 4.50. Ekaterini Stefandi had the best jump of the night of 4.60.

Family: Father Said Yusuf and mother Halimo Farah… Younger brothers Ibrahim, Kadar, and Hamza… Ibrahim runs track at Southern Utah University and competed at the 2012 World Junior Championships… Moved to Canada at age 11… Getting into the Sport: Started running track at age 13 after seeing his brothers running track at school… Has wanted to compete for Team Canada since watching Athens 2004… Outside Interests: Graduated from the University of Wisconsin-Madison in 2014 where he studied political science… Odds and Ends: Favourite motto: “Feel the Pain”… Listens to relaxing music or poetry before competing… Role model is three-time Olympic gold medallist Kenenisa Bekele… Nickname: Mospeed…

Staff Member
Wariyaha SomaliSpot
What the hell is wrong with you ! The man was a mile behind the breakaway group that included Mo Farah. Are we now celebrating losing like we are being forced to celebrate qoomu-luudhnimo
L

R.Kelly said:
What the hell is wrong with you ! The man was a mile behind the breakaway group that included Mo Farah. Are we now celebrating losing like we are being forced to celebrate qoomu-luudhnimo
Click to expand...

Sxb, he is not at their level. He can still grow and develop his strategy on winning in the future..

lone said:
Sxb, he is not at their level. He can still grow and develop his strategy on winning in the future..
Click to expand...

Sure! And I will, at the end, have @Reiko as a concubine. I mean it's next to impossible

Yo look in the mirror

ArchBishopofAtheism said:
Yo look in the mirror
Click to expand...

R.Kelly said:
Sure! And I will, at the end, have @Reiko as a concubine. I mean it's next to impossible
Click to expand...

He should be doing better. Pretty sure geeljires would run laps around him. Great effort tho I hope he develops.
Last edited: Aug 6, 2017

I used as an example of unlikely things to occur

i wish him the best in his track and field