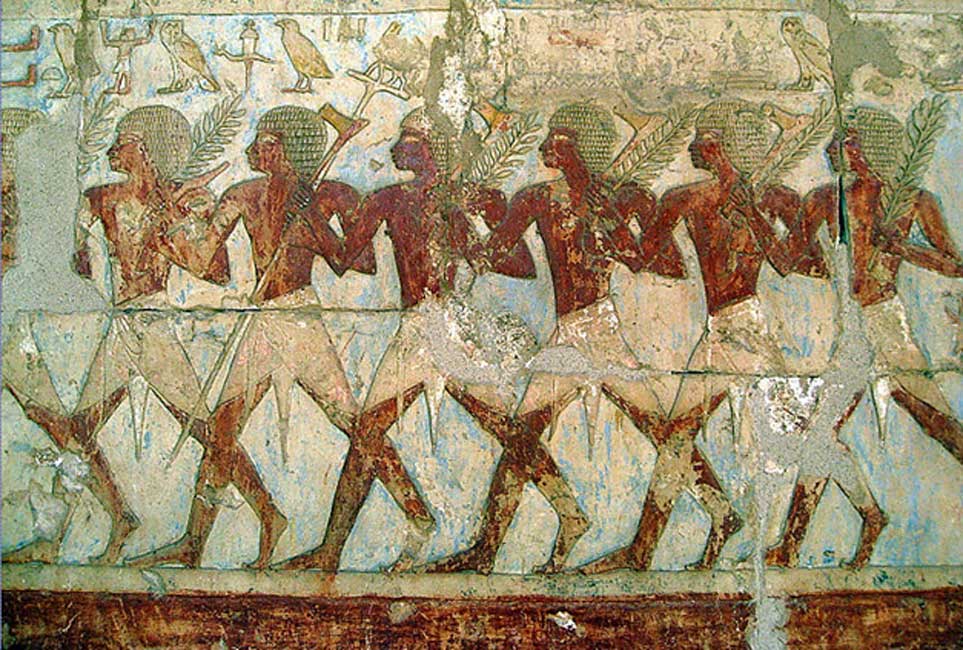 Tourists from all over the world are welcomed in Upper Egypt to admire temples and learn about the fascinating history of ancient pharaohs. However, the pharaohs’ true origins are not told and our literature is lacking adequate information.
Queen Hatshepsut's temple inscriptions at Luxor reveal that her divine mother, Hathor, was from Punt - with strong indications that the pharaohs considered the origin of their culture to be Punt Land . The following is a step in the direction of exploring the pharaohs’ roots and establishing a trip along history and time. 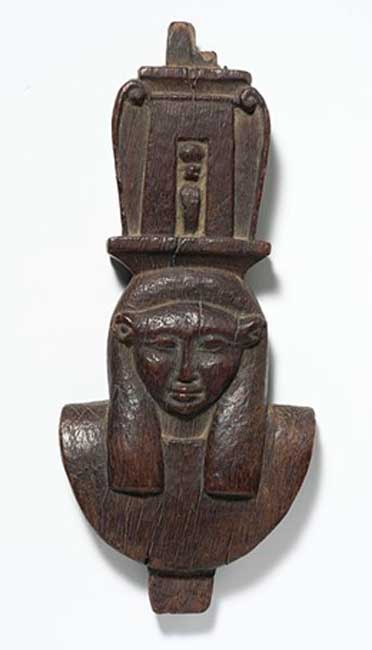 Carved cedar sculpture of the head of Hathor. (Egyptian 16th Dynasty). ( Public Domain )
​
The Land of the Gods
Punt Land is described in ancient Egyptian texts as the "Land of the Gods" and a region rich in resources. After Jean-Francois Champollion deciphered the pharaoh’s hieroglyphics in 1822 AD, western scholars began reading the texts. Debates started as to the origins of the pharaohs and the location of Punt Land.

Egypt grew as a nation with trade that increased in the latter part of the Pre-Dynastic Period (c. 6000-3150 BC). By the Early Dynastic Period (c. 3150-2613 BC) trade was firmly established with regions in Mesopotamia and Phoenicia. The Fifth Dynasty (c. 2498-2345 BC) witnessed Egypt’s flourishing through trade with Punt Land. 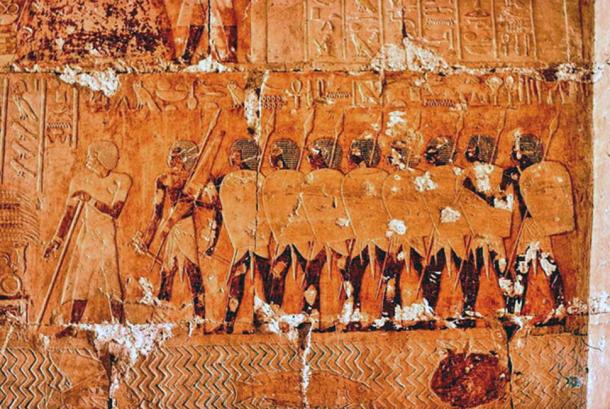 Egyptian expedition to Punt during the reign of Hatshepsut. (Hans Bernhard/ CC BY SA 3.0 )
​
Fourth Dynasty reliefs show a Puntite with one of Khufu’s sons, and Fifth Dynasty documents demonstrate trade between the two countries. A tomb inscription of the military commander Pepynakht Heqalb, who served under King Pepy II (2278-2184 BC) of the Sixth Dynasty, narrates how Heqalb was sent to "the land of the Aamu" to retrieve the body of the warden of Kekhen. 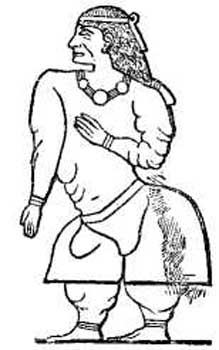 In Hatshepsut’s temple, an expedition shows Punt Land located in present day Somalia. The ancient Somali name for their region was "Bunn", a name referenced in texts related to trade with the pharaohs as "Pwenet" or "Pwene", and the region is known as "Bunni" today. The culture of Punt Land bears several resemblances to that of the ancient Egyptians, such as language, ceremonial dress, and the arts.

Left: Somali youth dancing the “dhaanto.” ( Somali Egyptian-Puntite History ) Right: Ancient Egyptians with similar white clothing in a fresco from the Tomb of Pashedu at Deir el-Medina. (kairoinfo4u/ CC BY NC SA 2.0 ) Pashedu was a "Servant in the Place of Truth on the West of Thebes" and probably began working while Seti I was pharaoh.
​
Regarding language, a comparison of ancient Egyptian to Somali vocabulary shows remarkable similarities:

VIP
HalimoEnthusiast
Punt Land’s Location Found
Based on the evidence of the ancient pharaoh’s inscriptions, Punt/Punt Land is certainly the State of Somalia at the Horn of Africa . The ancient city of Opone in Somalia is identical to the city of Pouen referenced as part of Punt by ancient inscriptions.

As previously mentioned, Hatshepsut's inscriptions also claim that her divine mother was from Punt - and there is evidence that Bes (the goddess of childbirth) came from Punt Land as well. Other inscriptions indicate that the 18th Dynasty pharaohs considered Punt as the origin of their culture. 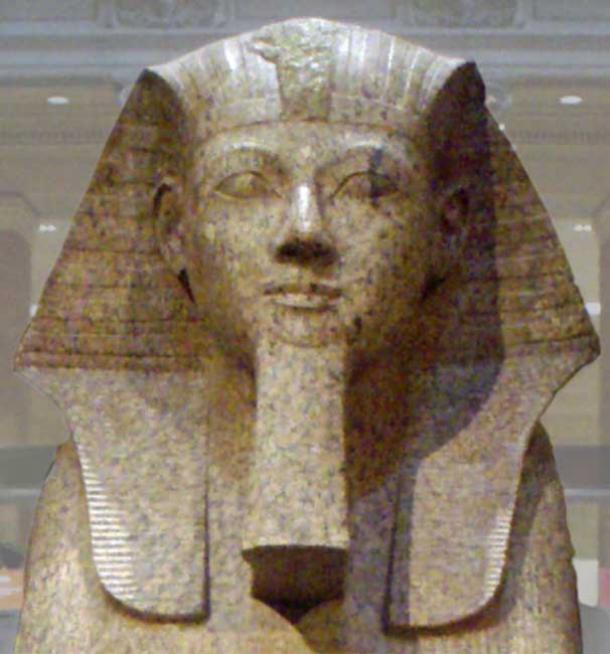 A large granite sphinx bearing the likeness of the female Pharaoh Hatshepsut. Dating to the joint reign of Hatshepsut and Thutmose III, circa 1479-1458 BC. (Keith Schengili-Roberts/ CC BY SA 2.5 )

Hatshepsut’s Punt Expedition
The Land of Punt was long associated with the gods in ancient Egyptian history because materials from Punt were also used in their temple rituals. Priests wore leopard skins, gold became statuary, and incense was burned in the temples.
Hatshepsut's reign was among the most prosperous in Egyptian history. She considered her expedition to Punt Land among her greatest successes. The importance of Punt to the queen is evident at her temple; where scenes from Hatshepsut's life decorate the walls of the colonnades; her birth, the transportation of obelisks for the Temple of Amun in Thebes , and the great expedition to Punt are all depicted. 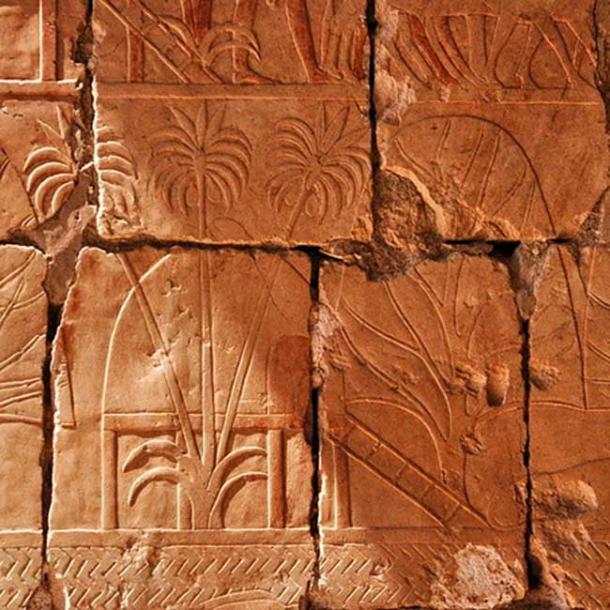 VIP
HalimoEnthusiast
Hatshepsut's Punt expedition had special significance, simply because it was larger than any other, and evidence suggests that it was directed by the gods to establish a connection. Amun-Ra of Karnak spoke from his sanctum in the temple and directed Hatshepsut to undertake the exploration of Punt Land. Hatshepsut made petition at the stairs of the Lord of the gods. A command was heard from the Great Throne , an oracle of the god himself, for her to search out ways to Punt Land. Hatshepsut then commanded that the will of the god be done.
She ordered the construction of five ships for the journey which traveled down the Nile through Wadi Tumilat. (The Arabic name of 'Wadi Tumilat' is believed to reflect the existence of a great temple to the god Atum in the area.) Then, they passed through the Pharaoh’s Canal in the eastern Delta. The crews carried their ships overland to the Red Sea after disassembling them. Then they hugged the shores as they made their way to Punt Land at the Horn of Africa. From inscriptions found in Hatshepsut's temple it is clear the Puntites were amazed at the pharaoh’s arrival.

An image of Queen Hatshepsut’s sailing boat during an expedition to the Land of Punt on the Red Sea coast. ( Public Domain )


Based on the inscriptions from Hatshepsut's reign, the five ships set out from a port on the Red Sea - probably Quseir, to journey southwards to Suakin, where the expedition disembarked with the ships that were hugging the shoreline. From Suakin, the route to Punt Land was overland through the Red Sea hills. 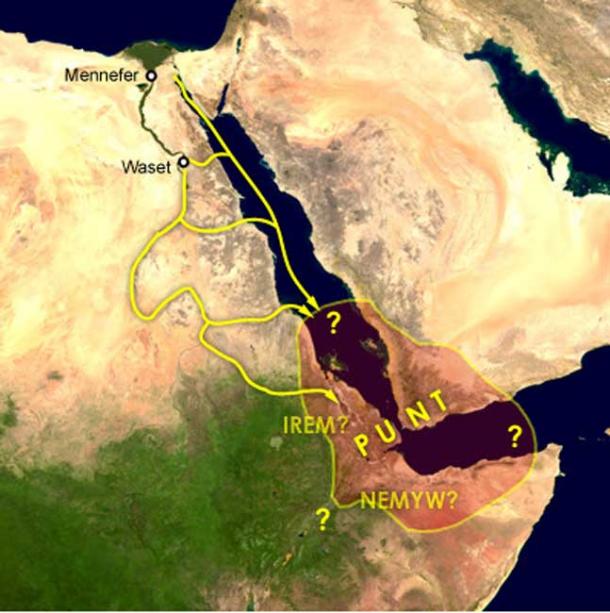 Map of a proposed location of Punt with trade routes from Egypt to Punt via rivers, wadis, and by sea. Mennefer is Memphis, Waset is Thebes and Irem and Nemyw are lands that supposedly border on Punt. ( Public Domain )

Trading with the Land of Punt
Inscriptions indicate relations between the two countries were very close and show the Puntites as an extremely generous people. The Land of Punt was routinely praised for its riches and the "goodness of the land" by many of the pharaohs’ scribes .

The expedition presented a fair exchange by both parties and the treasures offered by the Puntites were gold (even though the Egyptians had their own gold mines), wild animals, live apes, elephants, leopard skins, ivory, spices, precious woods, cosmetics, incense, aromatic gum, and frankincense and 31 incense trees ( Boswellia). This was the first time a plant species was successfully transplanted to another country. The transplant was so successful that the trees flourished in Egypt for centuries. 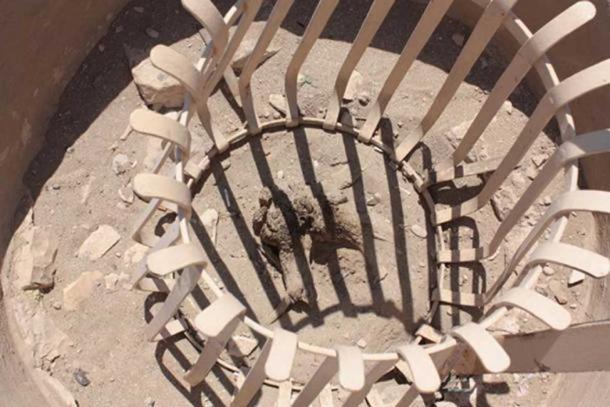 A tree in front of Hatshepsut's temple, claimed to have been brought from Punt by Hatshepsut's Expedition which is depicted on the Temple walls. ( CC BY-SA 3.0 )

The Puntite items were in return for the pharaoh’s weapons , jewelry, metals, and tools. The roots of the frankincense trees brought back from Punt by Hatshepsut’s expedition in 1493 BC can still be seen outside of her temple. 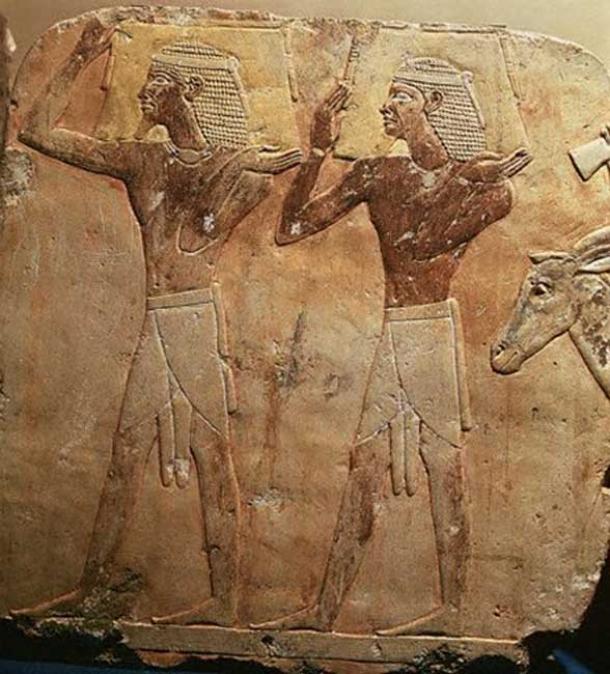 When we unite and rebuild our nation. And excavate the historical regions. Tourism from all over the world will be guaranteed. Especially because we also have an breathtaking scenery, from moutains to waterfalls to savannas to beaches to islands to southern greenery.