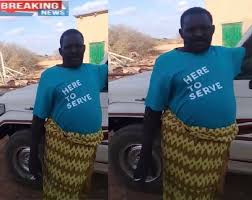 We need to deport this bantu back to Kenya

Pureblood said:
We need to deport this bantu back to Kenya
Click to expand...

Just keep buying him khamri, his liver will give out soon

waraabe said:
Just keep buying him khamri, his liver will give out soon

Pureblood said:
Punanland soldiers might just defect to SL once they see how fat this nigga caare is they gonna be like damn they eating good over there

Caare the thief probably stole others salaries also . His belly definitely came from excessive alcohol consumptions but he’s been eating a whole households worth of food on his own by the looks of it

But Egal does not go unpunished. His critics call him an explosive and armed opposition sees him as a dictator and even an alcoholic, an unmistakable criticism in an Islamic country. "He ignites quickly in anger," says one of his ministers. "For Somalis words may fall more painful than bullets. A large part of the current problems are due to him. He had lengthier have to negotiate with the militias before he told them the war. The sooner we are rid of Egal, the better for Somaliland. But the new war almost all clans united behind him. For his political position appears war unfortunately better than peace. "
The president an alcoholic? "It's a long time since I drank whiskey," Egal replied, "but I take sometimes a glass of wine."
Click to expand...

Looks like a punan! Is pissed caare has been mooching off him and won’t free sool and sanaag for the punan! Pussycats.

Plus he was a degenerate gambler.

Bohol said:
Plus he was a degenerate gambler.

Why you crying on another thread if it’s a backfired thread lol. Face it sakhraan caare isn’t going to free you kkkkk

waraabe said:
Why you crying on another thread if it’s a backfired thread lol. Face it sakhraan caare isn’t going to free you kkkkk
Click to expand...

He actually believes in Caare too, that's the most embarassing part.

Since I joined this forum most of what I predicted has happened. It's logical predictions saaxib.

Just wait a couple of years when we get free weapons from the Berbera 100 million dollar military base, courtesy of our Emirati brothers.

We will throw rocks at central Garowe from the border if they act up.