[...] in January 1889, through the new convention with the Sultan of Hobyo, by Vincenzo Filonardi Italian consul in Zanzibar, who had gone there with the Regina Naval Staffetta, we were granted the protectors of some territories in Somalia to South of the Horn of Africa. In fact, "on 2 December 1888," explains Fernando Marino in Crispi and the Italian Somalia, Sultan of Hobyo, Yusuf Ali, had sent a relative to Zanzibar to the Italian Consulate in Italy [...] to ask in his name the protection of the flag Italian. Yusuf Ali had asked for Italian protection to escape the English domination [...] Crispi with a telegram dated January 28, 1889 commissioned our consul of Zanzibar, Cav. Filonards, to embark on the Dogali ship to reach Hobyo and welcome the question of that Sultan. "

So on Friday, February 8, 1889, the Dogali moved to Hobyo where after long negotiations to which the Lieutenant Edward Ferrara was actively involved, an agreement was reached that all the territories of the Hobyo Sultanate were placed under Italian protection (with an annual fee of 1,200 thaler, then brought to 1,800). After the mission, lifted the Italian flag on the garra, Sultan's residence, the Dogali will route to Italy to arrive in La Spezia on March 20th.

Thus the doors were opened to what would become the future Somali colony then entrusted to a trading company - the Company for Benadir - on the model of chartered German and English. It will follow in April, always by Filonardi, the protectorate on the Sultanate of Migiurtinia, the northernmost region. 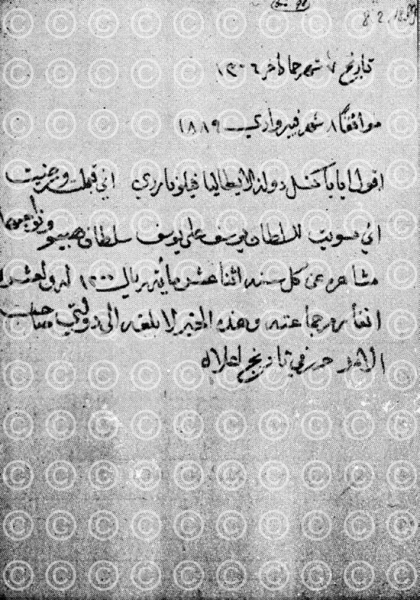 Act signed by the Filonardi Consul, which assigns to the Sultan of Hobyo Yusuf Ali 1200 talleri annual salary. February 8, 1889. 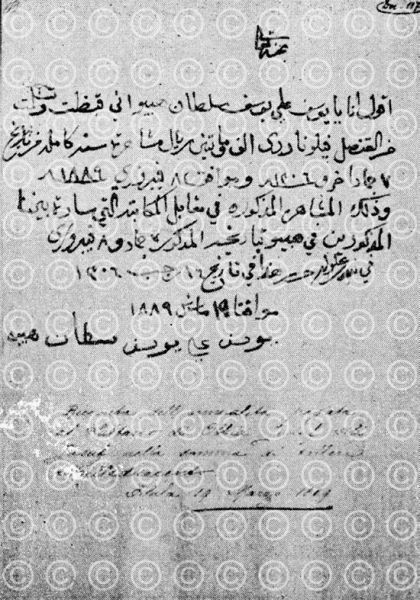 Receipt of the annual salary paid by the Filonardi Consul to Sultan Yusuf Ali. March 19, 1889​

There was next to no Italian presence in either the Hobyo Sultanate nor in the Migurtin Sultanate. They signed protectorate agreements with Italy and would be free of its direct influence for the next 40 years. There were no Italian soldiers stationed in either sultanate until 1926. Italian colonization barely lasted 34 years in the land formerly ruled by the sultanates.

Italy began penetrating Somalia in earnest along the Banadir coast, where real colonization by Italians started in the 1890s, a full 30 odd year head start to the northern portion of Italian Somaliland. The Italian acquisition of a claim to the Banadir ports from Said Bargash in the 1890s was the true beginning of Italian territorial penetration into Somalia.