The secret ballot in presidential elections is the root of evil

Staff Member
Somalia's president is elected through a secret ballot by MPs. This means that no one knows which candidate each MP has voted for. This means that there is no accountability. The MP's clan cannot punish him in the next election for voting for someone they did not want.

This provision is what allows MPs to take money from every candidate and is why the levels of corruption are so high. There is no way to know if the MPs you have bribed will vote for you. It also allows MPs to not have any responsibility for what the man they have voted for does, as they can claim they did not vote for him. The secret ballot in the presidential election is the source of much of Somalia's political problems.


When Somalia's parliament approved a draft constitution in 2012, the secret ballot provision was made part of the constitution. 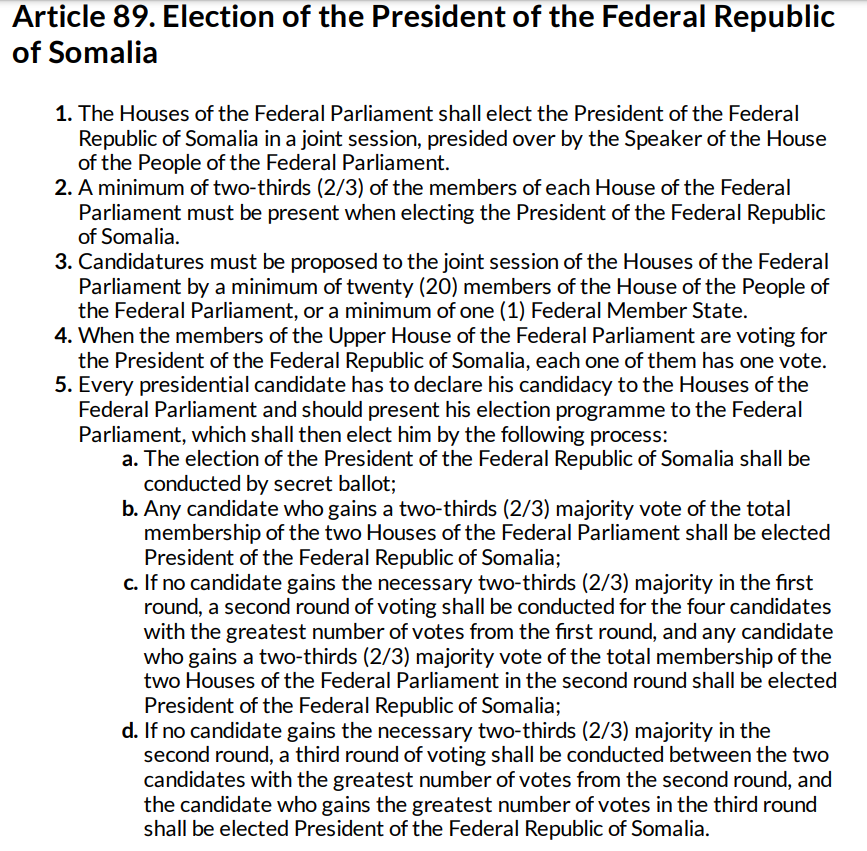 Where did this tradition of using a secret ballot for the presidential election come from? It comes from Somalia's 1960 constitution.

Where does Somalia's 1960 constitution get the idea of a secret ballot for the election of president from? The 1948 Italian constitution

It is time Somalia got rid of this colonial holdover. People should know who their MPs voted for.
Last edited: May 15, 2022

VIP
These folks don’t fear the grave and will feed their family the haraam money. I hear rates going from 40k-100k per vote when we are in the middle of a drought.

Secret ballot. Is actually a good thing until we move to 1p1v where the mp is already part of a party.

Them taking multiple bribes and then voting for who they think is the best candidate is much better then what you are suggesting.

NABADOON
VIP
I agree with brother cow, the mps can still go with their conscious even after getting paid with the secret vote and they don't have to fear repercussion, the other option is not good because the person with the most money will win through fear via extortion.
I hope the next president in 4 years is voted in by the public, this will solve most of our problems.

cow said:
Secret ballot. Is actually a good thing until we move to 1p1v where the mp is already part of a party.

Them taking multiple bribes and then voting for who they think is the best candidate is much better then what you are suggesting.
Click to expand...

What the secret ballot does is it allows MPs to escape accountability.
They are not forced to explain their vote to their constituents.
Without a transparent process, the government will not have legitimacy.

Thegoodshepherd said:
What the secret ballot does is it allows MPs to escape accountability.
They are not forced to explain their vote to their constituents.
Without a transparent process, the government will not have legitimacy.
Click to expand...

The mp's are not picked by their constituents. They are picked by FMS presidents. Marehan mps in gedo where picked by madoobe and not by marehan, similar to warsangali mps, leelkase mps, majerteen mps and so forth.

Not a single mp was picked by his elders or by his constituents. So you just want the new mps to be accountable by FMS presidents and destroy the last bit of freedom the MP'S have to pick who they think will benefit them or the country.

Close to 73 million spent so far by the candidates according to Geylan with more to be spent in the closing stages of the election.

VIP
Voting should always be anonymous, otherwise people can implement repercussions. I understand you want the vote to be outright bought , however that is not democratic and violates the privacy of MPS.

In the next election we expect 1P1V in a similar manner.
G

MPs around the world generally arent allowed to secretly vote on issues/nominations but then again MPs around the world are elected by voters instead getting selected by unrepresentative the oligarchs/elders chosen by FMS leaders. Somalia Italiana might temporarily get marginal benefits out of preventing oligarchs/elders/FMS from finding out how their unrepresentative MPs voted

VIP
The SYL held a discussion about switching to open voting prior to independence and decided to continue secret ballots.