The Iraq Report: Without Qasem Soleimani at the helm, Iran's grip is slipping

In the two years since Iranian Major General Qasem Soleimani’s death at the hands of a US drone strike, Tehran’s power has seen a slight but very noticeable backslide in its most prized possession – Iraq.

Eight years after Iranian officials bragged about controlling four Arab capitals – Baghdad, Damascus, Beirut, and Sanaa – as part of its new empire, the Iranian regime has faced unprecedented resistance to its expansionist policies that were first envisioned in 1979 but only took off in 2001 with the chaos caused by the US War on Terror in the aftermath of the 9/11 atrocities.

Without Soleimani at the helm, Iran has lost an irreplaceable strategic asset that threatens its control over the crown jewel of its nascent empire. Should Iran lose Iraq, it will spell the beginning of the end of its short-lived regional pre-eminence.

"In the two years since Qasem Soleimani's death at the hands of a US drone strike, Tehran's power has seen a slight but very noticeable backslide in its most prized possession – Iraq"

As a product of Ayatollah Khomeini’s Shia Islamist revolution in 1979, and after having gone through his baptism of fire during the Iran-Iraq War that put a temporary halt in 1988 to the Khomeinist ambition to expand the revolution beyond Iran’s borders, Soleimani was very much a watcher in the wings ready to execute his nation’s ambitions at the first given opportunity.

In the immediate aftermath of 9/11, Soleimani was instrumental in ordering Iranian intelligence to be sent to the United States to assist its invasion of Afghanistan to topple the Taliban.

This was partially due to Tehran’s enmity to the Taliban (they almost went to war in 1998) and also to reintroduce the idea in Washington’s consciousness that Iran could be a useful partner in the War on Terror. Of course, years later in 2021, Iran was amongst the first to congratulate the Taliban on expelling US and allied NATO forces after 20 years of insurgency.

However, through the goodwill it had developed through back channelling with the Pentagon in the invasion of Afghanistan, Soleimani’s strategies really started to come to fruition when then-president George Bush decided to launch another invasion in 2003, this time against the Islamic Republic’s oldest adversaryand the only country to have inflicted military defeat on it - Iraq.

Iran mustered a group of Iraqi “opposition” figures to gather at Washington’s behest to plan for regime change in London. It is unlikely that the Bush administration was unaware of the politico-religious affiliations with Iran of many of these opposition figures, yet the interests of both the US and Iran converged on the question of overthrowing Iraqi Baathist autocrat Saddam Hussein.

Once Saddam had been toppled, these opposition figures who had long been incubated by the Islamic Republic as they lived in exile in Iran were inserted into positions of authority and power in the nascent Iraqi democracy.

While there were many such proxies, chief among them in the first decade was Nouri al-Maliki of the Shia Islamist Dawa Party, a man who rose to the position of prime minister after a deal was cut between the US and Iran to find a mutually acceptable candidate to rule Iraq rather than allow Iraqi democracy to select its own leaders.

Under Iran’s patronage – and Washington’s acquiescence – Maliki presided over a destructive sectarian administration that a parliamentary investigation blamed for encouraging the rise of the Islamic State (IS) group, naming Maliki in particular as a cause in the loss of a third of Iraq in 2014. 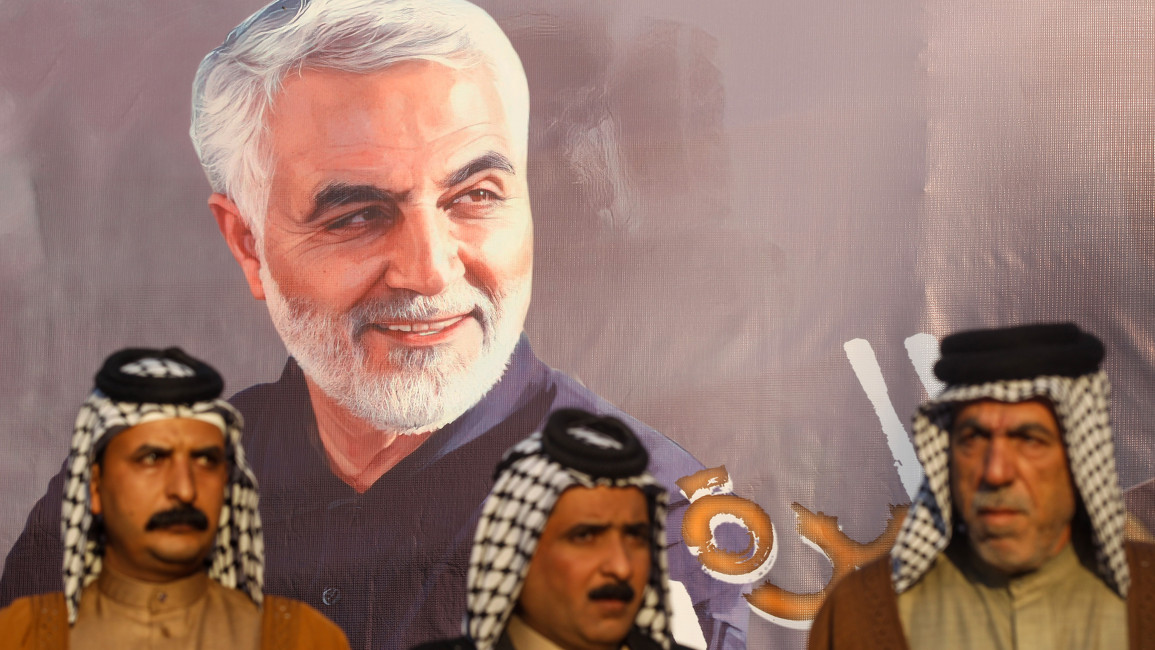 Iraqi tribal sheikhs stand next to a portrait of Qasem Soleimani during a demonstration in Baghdad commemorating his death. [Getty]

IS aside, the political process propped up by Tehran and Washington also introduced the muhasasa system, or the ethno-sectarian division of the Iraqi state’s executive functions. Ostensibly, this was to give a proportionate share of power to each of Iraq’s main demographics: the Shia Arabs; Sunni Arabs; and Sunni Kurds.

In reality, the muhasasa system has pitted various factions against one another and prevented the formation of any national unity governments, leading to spiralling voter discontent culminating in a miserly 40 percent turnout at last October’s elections.

These inherent structural defects in Iraq’s political process were not only exploited with great efficiency by Soleimani, but they were directly encouraged by him and amplified through his support for various, often competing, factions.

Soleimani not only pitted Shia against Sunni against Kurd, but he often encouraged one Shia proxy to directly compete for his favour against another, ensuring no one faction would think independently and branch off on its own.

This always left Iran as the main kingmaker, with Soleimani firmly holding the reins and using Iraq as Tehran’s backyard, ready to ease the impact of international sanctions by using Baghdad as a front through which it could engage with the international system.

This strategy also allowed him to use Iraq and his loyal Shia militant network as a tool to pressure the White House into concessions, or even as a launchpad to launch further campaigns of sectarian conquest in neighbouring Syria.

"The impact of Soleimani's loss cannot be overstated, as in the two years since his death his replacement Esmail Ghaani has repeatedly shown he is incapable of commanding the type of respect and loyalty Soleimani could" 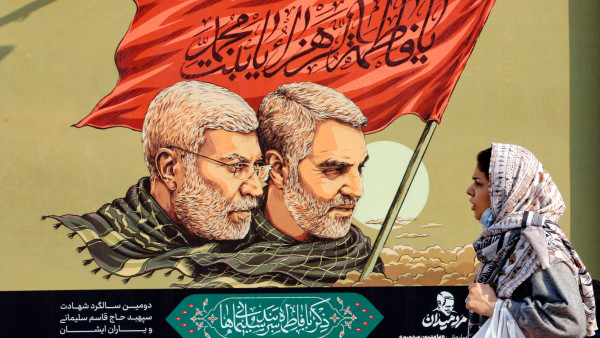 The Iraq Report: In Soleimani void, Iran's grip is slipping

Iran has lost its best strategist

However, and despite a career of illustrious if bloody successes, Soleimani’s biggest strategic blunder that ultimately led to his downfall came in 2019.

In response to the Trump administration’s decision to withdraw the United States in 2018 from the Joint Comprehensive Plan of Action (JCPOA), better known as the Iran nuclear deal negotiated and signed by former President Barack Obama in 2015, Soleimani decided to use Iraq as a bargaining chip.

Soleimani miscalculated, however, as he got more than he bargained for when he ordered Kataib Hezbollah, one of his main Iraqi proxies, to storm the US embassy in Baghdad and set fire to its buildings as 2020 was ushered in.

The embassy building is the largest of its kind in the region and was a symbol of American might. By assaulting the embassy, Soleimani crossed a red line that, unlike Obama in Syria, Trump was willing to enforce in Iraq.

In the early hours of 3 January 2020, as Soleimani departed Baghdad International Airport on his way to yet another meeting with senior Iraqi officials, his convoy was targeted by a US drone strike, killing the Iranian general and his top Iraqi lieutenant, Abu Mahdi al-Muhandis.

In one move, Trump had decapitated the second-most powerful man in Iran and one of the most influential characters in the Middle East over the past two decades. The strike simultaneously wreaked havoc on the Iraqi Shia militia chain of command, with the Popular Mobilisation Forces now missing its deputy commander.

The impact of Soleimani’s loss cannot be overstated, as in the two years since his death his replacement, Esmail Ghaani, has repeatedly shown he is incapable of commanding the type of respect and loyalty Soleimani could.

Iraqi Shia militants have expressed an unprecedented public level of discontentat the lack of largesse lavished on them by Ghaani, unlike his predecessor. They frequently behave independently and erratically, causing Iranian forces to step in to quell tensions on a regular basis, including by ordering them to accept the results of last October’s vote.

Such is the discord between them since Soleimani’s death that Ghaani has instead shifted focus away from spoiling a large number of factions to selecting a smaller elite that he knows he can rely on.

This could have a knock-on effect on Iran’s wider policies in Iraq as their traditionally loyal proxies feel left out of the equation and look upon this new elite with jealousy. This will inevitably lead these already competing factions to clash with each other, creating further chaos, which in turn will create further resentment amongst the electorate who are already apathetic towards public officials.

The more chaotic Iraq becomes, the worse it will be for Iranian control over its rump state that rules from Baghdad’s cloistered Green Zone. If another war is triggered, or if IS recomposes itself as a threat to the state, it will be difficult for Tehran’s strategists to retain control over their main asset that has allowed them to project power across the Middle East.

In other words, without a man like Soleimani at the helm – a man who was very much a force multiplier and a specialist in asymmetric warfare – Iran has no strategists capable of spearheading regional dominance.

As a result, Iran will have to rely on the longevity of what Soleimani spent decades building and hope that his plans have the staying power to outlive the ineptitude of those who replaced him.

The Iraq Report: In Soleimani void, Iran's grip is slipping

And Sunni led Iraq is the only solution for the country after the fall of the Baathist. (ISIS) clearly f*cked it up for the Sunni Arabs after 30 allied nations went to war against them giving Iran the gateway it needed to further occupy Iraq.
W