One of the kleptomaniac Federal Government ministers claims to have paid the Puntland Mujahideen Force their allocation of government money, i.e their salaries. In typical FG this has been proven to be untrue. Why would they pay Harti + Leelkase + Awrtable + Madhibaan (anyone else I forgot

) Mujahideen if they won't even pay their own bodyguards.

GAROWE, Puntland- In a statement released by senior officers of Puntland commandos, they rejected recent allegation made by Finance Minister of no outstanding arrears for Puntland state troops, Garowe Online reports.

Last Sunday, Puntland soldiers have staged mutiny in the state capital Garowe and seized control of the Parliament headquarters for hours demanding payment of their overdue salaries, however, the seizure ended following intervention of prominent clan elders and politicians.

The troops complained about of lack of military support and salaries for over 8 months, and poor welfare amid huge security tasks to fight militant groups in the region.

Yesterday, Finance Minister has released a statement claiming that Puntland government has paid salaries and entitlements to the troops on a monthly basis and there are no outstanding payments as claimed by the soldiers.

But according to the document released by the military officials and obtained by GO, the officers stated that a figure close to $ 740,000 is overdue that includes salaries, incentives, ration, welfare and services for the commandos in the period between 2014 and 2017.

Since the election of President Abdiwali Mohamed Ali “Gaas” in January 2014, he was blamed for failing to administer the region amid huge troubles facing the region mainly proliferation of terrorist groups, surge in attacks and drought

Ali is also accused of placing huge burden on the state budget with continuous foreign trips as the region witnessing unprecedented slow development progress in the past 3 years due to failed policies and corruption.

we need to bring farole back, this guy is just planning on what he is going to have for his next meal.

$$$$ said:
Yesterday, Finance Minister has released a statement claiming that Puntland government has paid salaries and entitlements to the troops on a monthly basis and there are no outstanding payments as claimed by the soldiers.
Click to expand...

You must have comprehension problems.

The article is referring to PL's Finance minister, Abdullahi Sheikh Ahmed, who claimed that; "Puntland government has paid salaries and entitlements to the troops on a monthly basis and there are no outstanding payments as claimed by the soldiers". 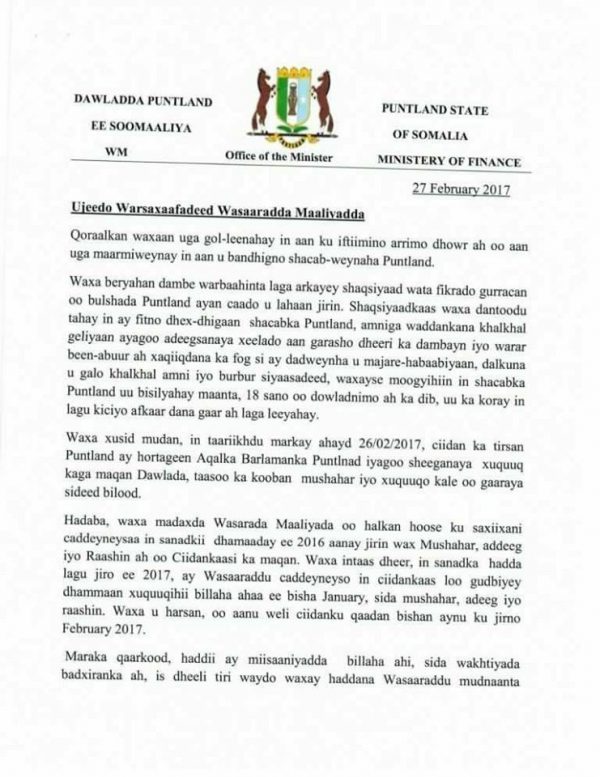 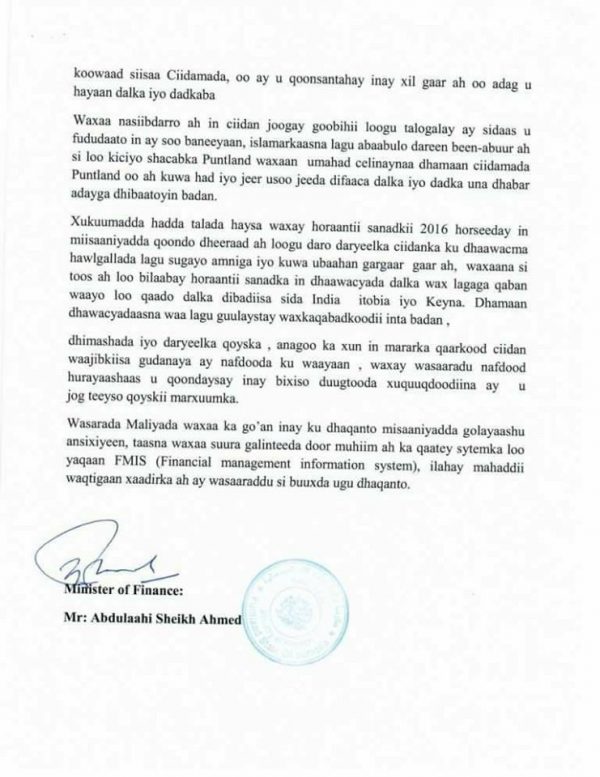 This happened a couple of days ago.