MARVEL'S 'ETERNALS' BANNED IN THE MIDDLE EAST & LIKELY CHINA DUE TO HOMOSEXUAL SCENES! 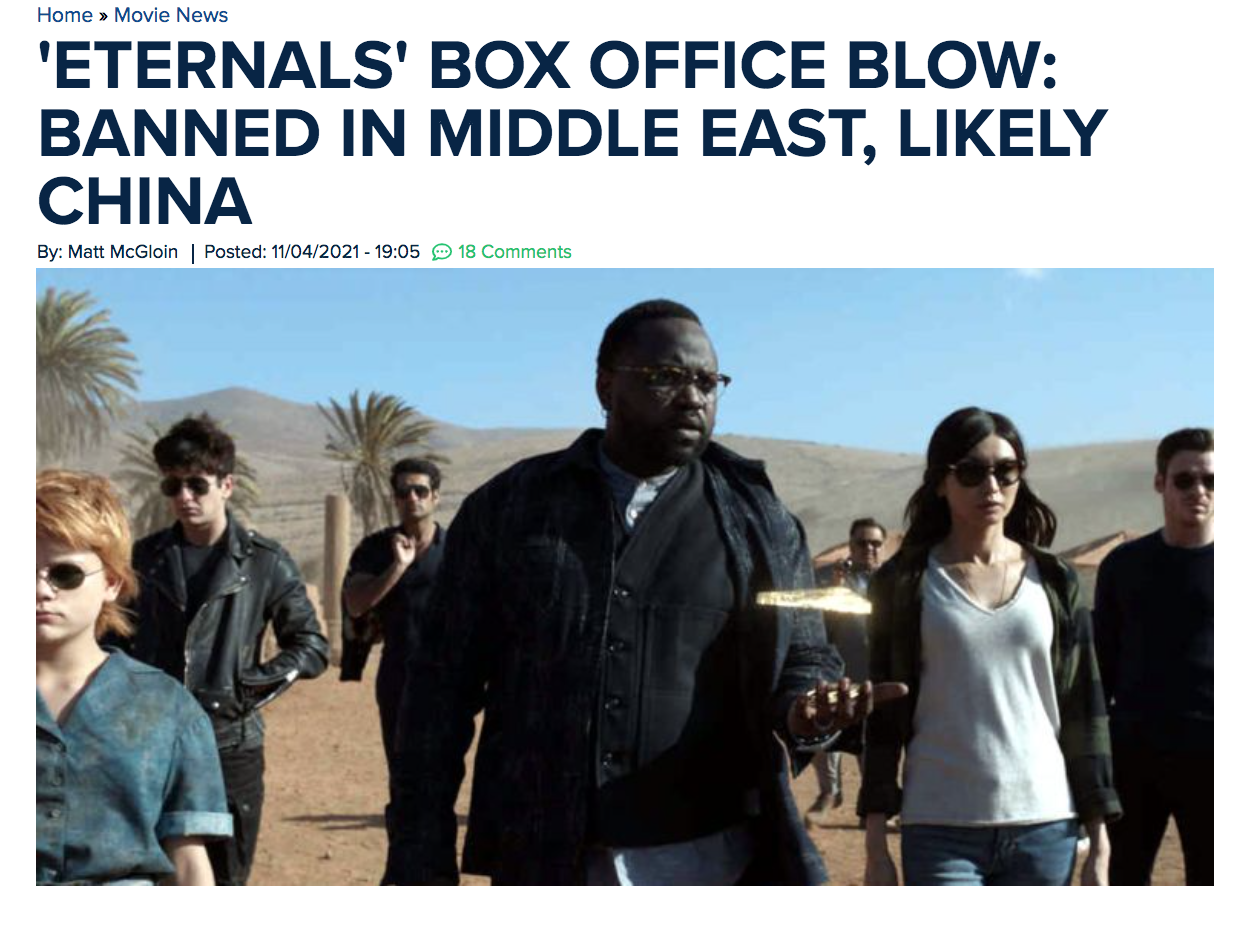 Eternals looks to suffer another box office blow as it is reported countries in the Middle East are either banning the film completely or screening an edited cut, which also follows it previously reported that the flick likely won't play in China, the number two market in the world.

Deadline reports Eternals has been banned in Saudi Arabia, Qatar, Kuwait, Bahrain, and Oman, and that the United Arab Emirates, Jordan, Lebanon, and Egypt are releasing a censored version of the movie.

It's said that in Saudi Arabia, Bahrain and Oman, "the censors wanted further cuts beyond any scenes of intimacy and that Disney opted not to make the edits," so Eternals isn't going to be released.

In Kuwait and Qatar, it's claimed the issue wasn't the homosexual scenes, but that "the region has historically had a problem with the depiction of gods and prophets, something they consider blasphemous."

Regarding how much Eternals is set to lose by being banned by those Middle Eastern countries is unknown as they aren't listed as part of the box office of any of the Marvel movies, so maybe it's not that much.

What is really going to hurt Eternals, and it is something that hurt both Black Widow and Shang-Chi, is not getting a China release, as if we compare these flicks' box offices to that of the Ant-Man movies, China made up around 20% of the gross, so Eternals, Black Widow, and Shang-Chi are probably losing out on close to $100 million or more each.

While China hasn't officially banned Eternals, Black Widow, and Shang-Chi, the fact none of the movies have release dates says it all, which has to do with controversial comments from some of the cast members, including Eternals Chinese-born director Chloe Zhao making comments about how there are "lies everywhere" in China which also saw her Oscar Award-winning Nomadland not get released in the Middle Kingdom.

The film also has an MCU low of a "Rotten" 51% Rotten Tomatoes score.
B

SIYAASI
VIP
Good on China, that'll be a big loss for the movie box office wise.

VIP
Damn, and he's a brother too.
G

repo said:
Damn, and he's a brother too.
Click to expand...

It was definitely the gay scenes.