Nas has influenced every rapper of substance to have released music after him. But amateur rapper Lonzo Ball doesn’t think that much of him.

NBA rookies usually don’t come into the league with the intention of disrupting the natural order of things as they stand. After all, they’re like fresh meat to a bunch of hungry veterans.

Challenging the status quo takes a lot of backbone as well as a ton of conviction and self-belief. Lonzo Ball definitely didn’t lack in that regard, seeing as he’s LaVar Ball’s eldest son.
Lonzo may not have said much controversial stuff on the basketball court or regarding basketball. But given his self-professed interest in music and how he dabbles in making his own mixtapes, one would assume that he pays the respect that the legends deserve to get.
But Lonzo decided that he wanted all the smoke from New York basketball fans and hip-hop fans alike. There can be no other explanation for why he decided so brazenly to disrespect the greatest MC from the borough of Queensbridge – Nas.

“No one of my age listens to Nas, Future has more classic albums”: Lonzo Ball​

Ball raised several eyebrows when he stated as a rookie that he thought Nas is overrated. The Ball family had begun their own reality TV show at that time and were clearly looking to attract eyeballs.

Whether or not Lonzo was sincere in dismissing Nas’ credentials, he certainly went at it full throttle. Ball went all out by modifying the album artwork for Nas’ It Was Written to impute his face instead of a young Nas. He put that picture on his t-shirt while playing at Madison Square Garden as well.
The disrespect to Nas didn’t even stop there. Lonzo went on an interview as a 3rd year player to talk about his favorite rappers. While doing so, Ball had the nerve to mention Nas and Future in the same sentence as artists of the same caliber!

NBA Twitter couldn’t quite believe his 2019 interview with Complex magazine. The reactions, as expected, were scathing reviews of youngsters from this generation
The idea that commercially successful music is good, influential music that appeals to other artists is fallacious. And Lonzo continues to use that argument to justify his stance that Future is better than Nas.

It looks like the former Lakers and current Bulls star needs better education on how to make logical arguments. Or perhaps he needs to understand the journey of how rap music evolved in a more holistic fashion. Because his current views are downright pathetic and deserve no traction. All he deserves is to be roasted for his asinine takes.

"No one of my age listens to Nas, Future has more classic albums": When Lonzo Ball disrespected New York's resident rap GOAT as a Lakers rookie and got clowned by NBA fans - The SportsRush

Nas has influenced every rapper of substance to have released music after him. But amateur rapper Lonzo Ball doesn't think that much of him.

VIP
Hes not lying tho, future catalog is better than nas 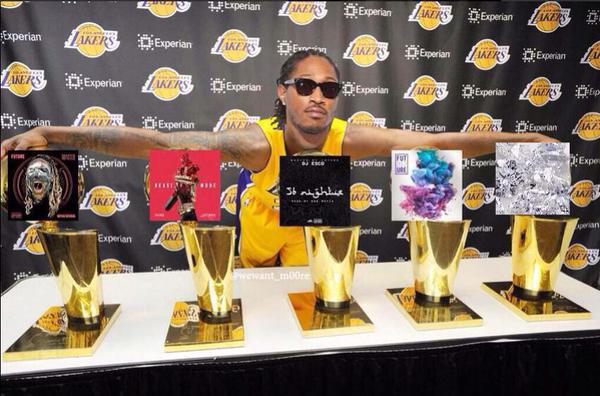