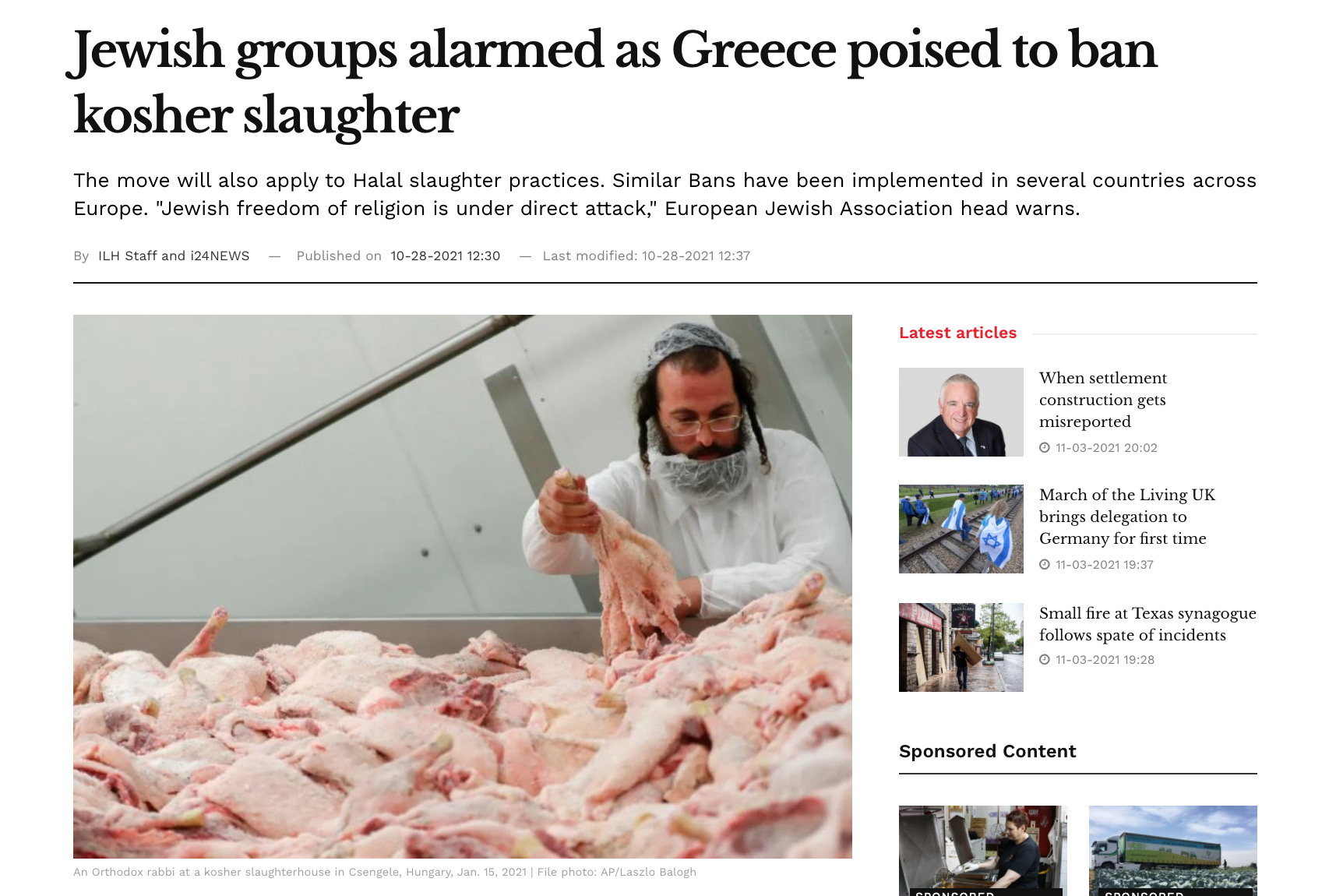 The Hellenic Council of State, the highest court, in Greece, ruled on Tuesday to ban halal and kosher slaughter, raising alarm among Jewish religious groups concerned about infringements on religious freedoms.

The ruling saw the court revoke the standing slaughter permit, which was provided through a ministerial decision that exempted ritual Jewish and Muslim slaughter practices from the general requirement to stun animals prior to killing them.

The ruling further called on Greek lawmakers to devise a way to meet the demands of animal rights advocates and the needs of Jews and Muslims who follow the laws about food in their traditions.

"The government should regulate the issue of slaughtering animals in the context of worship in such a way as to ensure both the protection of animals from any inconvenience during slaughter and the religious freedom of religious Muslims and Jews living in Greece," Greek news site Protothema cited the ruling.

"We warned in December about the downstream consequences that the European Court of Justice ruling carried with it, and now we see the outcome," Director-General of the European Jewish Association Rabbi Menachem Margolin told JTA.

"Jewish freedom of religion is under direct attack. It started in Belgium, moved to Poland and Cyprus, and now it is Greece's turn," he warned.

Bans on ritual slaughter have been implemented in several countries across the region, including Sweden, Slovenia, Estonia, Denmark, and Finland.

The bans are part of a struggle across Europe between animal welfare activists and Muslim and Jewish community representatives.
Last edited: Nov 4, 2021

VIP
F*ckin piece of filth animal rights activists. Why do these assholes wish to make the lives of humans worse. Worry about your own species you idiots!
G

The Hellenic Council of State

damn what a baller name

VIP
It's acceptable to stun it first for Muslims or import halal/kosher meat.

repo said:
It's acceptable to stun it first for Muslims or import halal/kosher meat.
Click to expand...

I don't think stunning is halal

repo said:
It's acceptable to stun it first for Muslims or import halal/kosher meat.
Click to expand...

It isn’t actually but our muslim food agencies in the west are cucked.

bidenkulaha said:
It isn’t actually but our muslim food agencies in the west are cucked.
Click to expand...

So Muslims have been eating haram meat all along?

repo said:
So Muslims have been eating haram meat all along?