How journalist Amanda Lindhout's brutal kidnapper was brought to justice

In the months after her release from captivity, Lindhout received a message on Facebook out of the blue. It read “Hello” and was from her kidnapper.

li Omar Ader is currently sitting in a Canadian prison after being sentenced in 2018 for his role in the brutal 2008 kidnapping of Canadian freelance journalist Amanda Lindhout.

But the story of how Canadian authorities found and trapped this kidnapper through an international sting operation sounds more like a dramatic Hollywood screenplay than a real-life investigation.


“We always refer to this operation as the Hail Mary play,” said an investigator with the Royal Canadian Mounted Police who asked to remain anonymous as he continues to work undercover. “We didn't think it would work. And as it was continuing… we were surprised ourselves.”

The investigator shared exclusive new details about a dramatic sting operation for the first time with Kate Snow in a “Dateline” NBC episode airing this Sunday at 10 p.m. (9 p.m. CT).

Lindhout was working as freelance journalist in Mogadishu when she was kidnapped by a group of young Somali men. They held her captive for 460 days, during which time they raped, assaulted and tortured her. One of the few who spoke English called himself “Adam.” His real name was Ali Omar Ader.

During Lindhout’s time in captivity, Ader contacted her mother, Lorinda Stewart, in Canada to demand a ransom payment. For months, Stewart engaged in terrifying and excruciating negotiations with him before she was able to secure her daughter’s release.

“I would not be here now if it was not for my mother,” Lindhout told “Dateline.” “My mom gave me life and she saved my life.”

Lindhout returned to Canada. She wrote a book called “A House in the Sky” and told her dramatic story in an episode of “Dateline.”

But that was not the end of the story.

In the months after her release from captivity, Lindhout received a message on Facebook out of the blue. It read simply “Hello.” It was from the kidnapper she knew as Adam.

“It was so scary that he could find me, even though I was safe and across the world and was at home,” she said.

Lindhout called the Royal Canadian Mounted Police right away, starting what would become a dramatic operation to bring the man to justice.

The investigator with the Canadian police reached out to Ader, posing as a media consultant for Lindhout’s family. The two men then spent the next several years talking and e-mailing, with Ader eventually revealing that he was well educated and he dreamed of writing a book about the history of Somalia.

“That's our in,” the investigator recalled thinking, adding that their ultimate goal was to bring the man to justice.

“It totally fits in line with what I knew of this man,” Lindhout said. “He struck me as the kind of guy whose ego was so big… of course, if somebody told him he's capable of writing a book, he would think that.”

The investigator convinced him to meet in person in Mauritius, an island in the Indian Ocean off of Africa’s east coast, to sign a book deal.

Of course, it was all phony — but Adam didn’t know that. He also didn’t realize that the contract had a trap buried in it, a disclosure paragraph to encourage Ader to reveal details about his past, including the kidnapping of Lindhout.

It worked, and Ader confessed to his participation in the kidnapping.

“In my head I was dancing. It was amazing. You couldn’t ask for better evidence,” the investigator said.

But that still wasn’t enough to bring the man to justice.

Authorities in Mauritius would not allow investigators to videotape the operation, so the Royal Canadian Mounted Police created a means to lure him all the way to Canada.

Using another ruse related to the fake book deal, and a series of convoluted flights, the investigator was able to get Ader to a hotel in Ottawa. There, he confessed to his past — all while hidden video cameras were rolling.

And when Ader and the investigator walked out of the room, they were both arrested.

“They handcuffed us both, led us off in different directions,” said the investigator, who remained undercover during the apprehension. “I went for a beer. He went to jail.”

In the end, Adam was found guilty and sentenced to 15 years in prison. The international operation to capture him had taken more than five years.

When asked if bringing Lindhout’s kidnapper to justice was worth all that time and effort, the investigator doesn’t hesitate in his answer: “Absolutely.”

This is the fool criminal. He looks like @R.Kelly 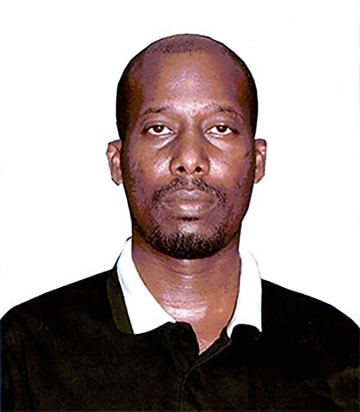 Staff Member
Wariyaha SomaliSpot
Why are you calling me a rapist?

R.Kelly said:
Why are you calling me a rapist?

Sxb, that’s the mental image I had of your looks. He was a fool. Finally, justice has been done for his victims.

How stupid can you get

A rapist who thinks he is a historian

He even thought his victim was getting him a book deal

@Reiko @Steamdevolopment this deserves to go on worlds dumbest criminals

How stupid can you get

A rapist who thinks he is a historian

He even thought his victim was getting him a book deal

@Reiko @Steamdevolopment this deserves to go on worlds dumbest criminals
Click to expand...

He had the nerve to contact his victim on Facebook and wrote "hello" to her. How stupid is this guy? A Somali historian!!!

He had the nerve to contact his victim on Facebook and wrote "hello" to her. How stupid is this guy? A Somali historian!!!

If they made a film about it no one would believe it: a rapist contact his victim for a book deal because he fancies himself as a historian

It would require a stretch of the imagination that The film alien versus predator doesn’t even require
Last edited: Jan 13, 2019

We need a farax joint statement to explain this baboonish behaviour

Here is your friend and his defence was that he was also kidnapped and forced to interpret for the hostage takers.

We need a farax joint statement to explain this baboonish behaviour
Click to expand...

Why tag me when you could've asked @AussieHustler

We need a farax joint statement to explain this baboonish behaviour
Click to expand...

AussieHustler said:
his defence was that he was also kidnapped and forced to interpret for the hostage takers.
Click to expand...