Habesha are a South Arabian tribe

VIP
It is the truth

Its for the ones that think Habesha are somewhat very different from Arabs.

VIP
No. Habesha indeed have some arabian dna but they also influenced the south arabian people.

CaliTedesse said:
It is the truth
Click to expand...

I guess the only option now is to make our claim on the Highlands. 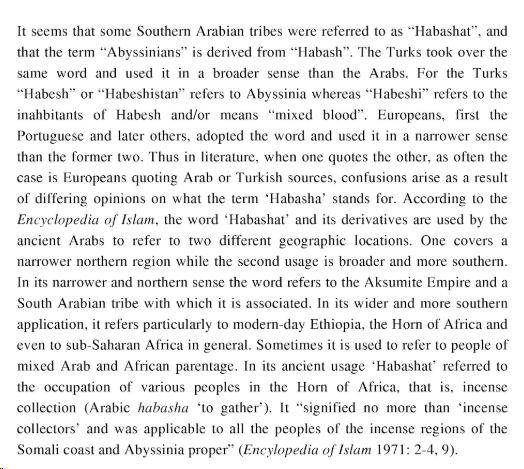 CaliTedesse said:
It is the truth
Click to expand...

yep true, they are him himyarites, but this is only real habashi, yuo have a lot of asmilited habashi who claim habashi like some tigra, some orormo, agaw, guraga , the agaw waa more eriterian/north ethiopian natives who over thousnds of years have been assimilated, the asli habashi are ot that numerous, they asmsilited weaker labguages and races for thousands of years, made them chritians,

the somalis though have always been able to karbash them for centuries, like adali satte of ahmed gurey and way before him,

we alsoused to karbash habashi and the oromo hordes, most oormos were pagans who raped and pillaged habashi and attacked somalis, but were defeated and amsilited, the ones defated by habashi became chritians, the ones defetaed by various muslims states and tribes like Ogaden became muslims,

the Ogadens waged a fearce war with oromo between 1500s and 1800s asmiliting the pagan oromo and spreading islam, whilst the habashi did the same to the pagan oromos who used to riad and pillage habashi towns in shewa/gondar-ahmara region,

the oromos who were not defated by either habshi or Ogaden stayed in the middle and west and remained pagasn -gedeo, some borans, sidamo and many others, these in central/western oromia were invaded and taken by ethiopia in the late 1880s with the help of british and russian weapons leading to the creation of the modern ethiopian state,

the central and western oromo were the most fearce warriors but far away from muslim/Ogaden borders and habashi borders,

the likes of the boran, arusha/arsi, harage, gurgure, gurre, jaarso, akisho were all islamised by Jidwaq/Ogaden wars by force, hence why we call them Galla becasue when we met them they were galla,

no one actually knows where oromo came from, they just appeared in the east africa war arena by 1550s, before that it was the usualy wars between Jidwaq-Ogaden-Absame-muslim wars vs habashi chrtians who killed each other, they just appeared in Ogaden/habashi borders and atatcked and actually for 150 years almost karbashed Oagden and habsshi alike and asmilited themlves many groups who today speak two langauges like sidama, boran, gedoe etc, weaker oromised races,

but many so called habahsi are acually today gambella mixed with oromo, banshunguli, tigra mixed with others etc from eriteria,
F

the habashi are the real refugees from yemen, the are related to himyarites

CaliTedesse said:
Its for the ones that think Habesha are somewhat very different from Arabs.
Click to expand...

bro they even have the same hook nose, they are both short-arabs rom yemen and saudi are very short masha Allah,

remmeber the ethiopian king whop atacked makkah in surat the elephant in the quran?

he did this some say the same year the nabi SAW was born -570 ad, the himyarite kingdome was taken over by jews in yemen and killed chritians, so he went there to defend his fellow himyarites but went too far when the jews legged it to makkah, so he went there to destroy it, and as a result wGod setroyed him and his army-the surat is call The Elephant, becasue he used elephants to attack yemen and then arrogantly went after the jews who ran to makkah,


Translation
In the name of Allah, the Beneficient, the Merciful.

Hast thou not seen how thy Lord dealt with the owners of the Elephant?
Did He not bring their stratagem to naught,
And send against them swarms of flying creatures,
Which pelted them with stones of baked clay,
And made them like green crops devoured (by cattle)?


we know the nabi was born this year becasue the nabis granddad was the cheif qureysh, the king consifcated the camels of the nais grandad and said bring out the jews or i will destroy the kabbah, the grandad said dude God proets this house, be careful what you wish for, just give me my camels, god sent bords carrying stones from hell as punishedment,

the run away army that survived was turned into slaves, to this day they are called mi1dagn in yemen society they are around 3 million and are hated,

also there was a qureysh who i forgot the anme, he approahed the habashi king and told him i will show you makkah if yuo pay me, he died on the way, at the time of the nabi SAW the qureysh would throuh stones at the grave just outisde of thie men who nearly betroyed the kaabbah and spit on his grave,

so we know surat al-fil-the elephant was about the habashi who invaded yemen to retake it to defend their cousins after the jews became strong,

then the persians came and conquered the habashi in yemen and took it over until it was freed by abu bakr and umar ibn khatab by late 630s, because the qureysh used the justification that the qahtani who were neighbours with the himyarites were asli arabs and the tribe gave brth to the wife of the nabi ismael, so it was a duty to denfed their reer abti,

yemen still has many langauges not just arabic, you have the qahtani, the socatra even speak their own various languages closer to sanskrit, the kinder, the sheeba/sabeans where queen sheba was from, the hadramawt, many dififeerent kindoms and langauges over the years

the ashabas took pity and kicked out the persians for the qahtanis were their reer abti as ismael married two wifes from them,
F

some maybe be asking why on earth were there jews in yemen centuries before the nabi SAW was born,

becasue in the early firstc enturies, the jews were kicked out by the Romans and by 70 AD were karbashed and almost wiped out so they legged it to makkah, madina, yemen as the Persians and paans were much friendlier,

even the greeks of alaxendar when they conquered the jews would place pork and ham on the jewish rtmeples,

it was a curse sicne they killed 300 nabis one day, Allah would give bani Israel a nabi, then his sosn, grnadsons would all become nabis, they slaughtered them so God send the greeks and romans to teach them a lesson and of course yuo have nabachuradsar the Babylonian king who enslaved them and took them to bagdad, so they all run to arab cities as they knew the last nabi would come from an arab city named ahmed, msutafam, mohamed

roman who an empor named , he was very dark, he killed albinus a very white general during the tumultuous era where 200 emperors vied for power in 100 years,

VIP
That's like saying AAs are a Germanic tribe

~30% of habeshas have J1 HG the others have the typical horner HG.

Nilotufian said:
That's like saying AAs are a Germanic tribe

Thats retarded comparison since African Americans hail from West Africa and Habesha are very close in proximity to South Arabia.

Apollo said:
Habeshas are mostly Cushtic in origin. Their Semitic ancestry is secondary.
Click to expand...

What do you mean cushitic? What makes one cushitic?

CaliTedesse said:
What do you mean cushitic? What makes one cushitic?
Click to expand...

Cushites were a group of agropastoralists from Northeastern Sudan that conquered the Horn. Ethnic Somalis are the best example of the Cushites.

Habeshas are about 70% Cushitic in origin. The rest is Yemenite and Omotic.

Soqotris are a much better example of true South Arabians, not the Habesha.

Apollo said:
Cushites were a group of agropastoralists from Northeastern Sudan that conquered the Horn. Ethnic Somalis are the best example of the Cushites.

Habeshas are about 70% Cushitic in origin. The rest is Yemenite and Omotic.

Soqotris are a much better example of true South Arabians, not the Habesha.
Click to expand...

I see that is very cool. So let me rephrase myself , the true Habeshi is South Arabian. Does that make sense?

No thanks, we are not Arabs.


Fiidmeer said:
~30% of habeshas have J1 HG the others have the typical horner HG.
Click to expand...

ሕጊ።። said:
No thanks, we are not Arabs.

You are not Habesha they do not deny Arab ancestry.

ሕጊ።። said:
No thanks, we are not Arabs.