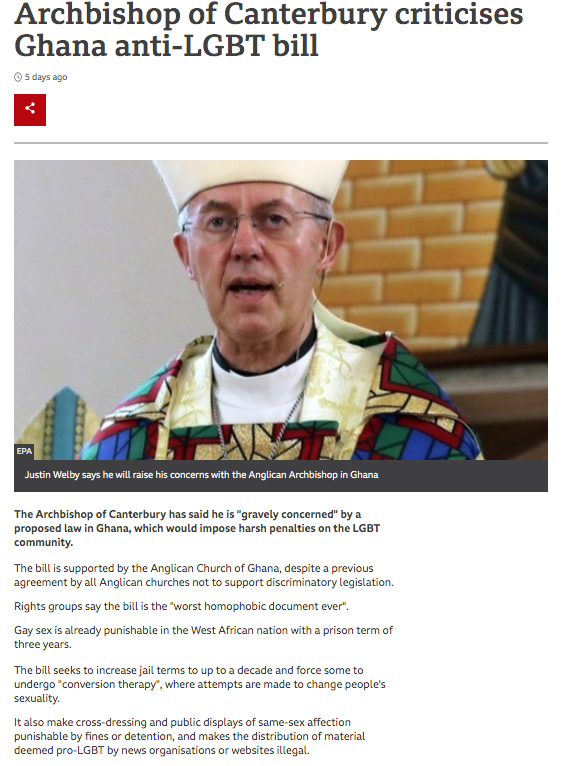 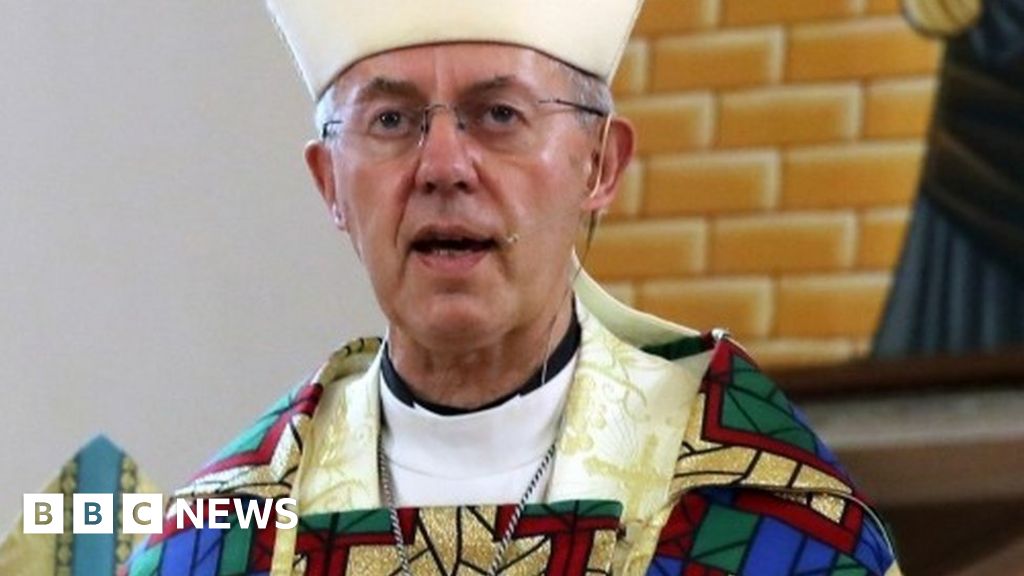 Justin Welby says he is "gravely concerned" by a Ghanaian proposal that would punish people for being gay.
www.bbc.com

Christianity is the largest religion in Ghana, with about 70% of the population belonging to various Christian denominations.

Justin Welby, the Archbishop of Canterbury and the symbolic head of Anglicans worldwide, said he would raise his concerns with the Anglican Archbishop of Ghana in the coming days.
"We are a global family of churches, but the mission of the church is the same in every culture and country: to demonstrate, through its actions and words, God's offer of unconditional love to every human being through Jesus Christ," he added.
The Anglican Church in Ghana has not yet responded to his statement, but it has previously said that it "does not condemn persons of homosexuality tendencies but absolutely condemns the sinful acts and activities they perform".


Who supports the proposal?​

Ghana opposition MP Samuel Nartey said he was in favour of the bill.
"In the last research carried out by a private civil society organisation 93% of Ghanaians support this position. Laws are a reflection of what society desires. The UK for example has laws that reflect what the British people want; Brexit is a reflection of what British people wanted," he told the BBC's Newsday programme.

However, the BBC's Thomas Naadi reports from Ghana that more than 100 petitions have been submitted against the bill.
Nevertheless, the bill was likely to pass because the majority of MPs support it, he says.
Parliamentary speaker Alban Bagbin has said that the bill - which still faces months of debate - will undergo a thorough and transparent process before MPs vote on it.

What prompted the bill?​

Named "Promotion of Proper Human Sexual Rights and Ghanaian Family Values", the bill was mooted months after Ghana's first LGBT community centre opened in January.
The venue in the capital, Accra, was later closed by police after public protests.
A UN human rights expert has said that the bill "will promote a system of state-sponsored discrimination and violence" against sexual minorities in Ghana.

There is no law in Ghana that says being LGBT is illegal. But same-sex relationships are criminalised by a penal code - introduced by the British when they ruled Ghana - that mentions "unnatural carnal knowledge". People found guilty risk three years in prison.
The code "is completely vague", and is rarely enforced, but is interpreted by authorities as "penile penetration of anything other than a vagina", according to Dr Anima Adjepong, a US-based Ghanaian sociologist researching gender, sexuality and identity in West Africa.


How has the LGBT community reacted?​

The Ghana News Agency reported on Monday that police had arrested two people who had been living together for about two months for alleged homosexual activities.
However, the accused denied the allegations.
Campaign group RetifyGhana tweeted that five gay people were also remanded in custody last week, denouncing the latest bill as a "homophobes dream".
"In Ghana, homophobia is being promoted by religious, political and media personalities. The media especially participates and enables homophobia," the rights group added in a tweet.
There are 69 countries that have laws that criminalise homosexuality, and nearly half of these are in Africa.
However, in some countries there have been moves to decriminalise same-sex unions.
In February this year, Angola's President João Lourenço signed into law a revised penal code to allow same-sex relationships and bans discrimination on the basis of sexual orientation.
Last edited: Nov 1, 2021

Kinda weird move since Ghana has been bootyclapping for Aframs to move back, a lot of the ones who move to Ghana are the liberal kind.

Lmao at African "therapy", this is pc doublespeak for retarded witchcraft and voodoo rituals

For the life of me , I don’t get African leaders’ logics. Let me get this straight, there are mass starvations and hunger and you are worrying about who another man sleeps with?

Let Them Eat Cake
VIP
Africa is the last frontier of the universe. The day Africa accepts homosexuality, the world is over.


I like usually to observe africans like they are zoo animals. Something i play with them in real life, i tell them i am part of LGTB group. They make very painful sounds of surprise and then i have to remind them i am Muslim. Ha ha ha ha ha

"Alot of people want to see me perish" based Ghanaians